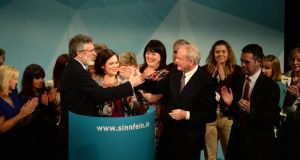 Public transport companies are likely to lose their most stable subsidised routes to large multinational operators because of Government policy, the Sinn Féin ardfheis has been warned.

Party transport spokesman Dessie Ellis said the privatisation of 10 per cent of routes across 26 counties and 100 per cent of those in Waterford, “will further undermine Bus Éireann and Dublin Bus” and put jobs at risk.

“Now they will have to compete with private operators who will drive down wages and cut services to maximise profits for their shareholders.”

Pledging that Sinn Féin will prevent the privatisation of public bus routes if elected to government, Mr Ellis also reiterated the party’s opposition to the sale of the State’s share in Aer Lingus.

“Whether in six months or five years we will continue to need Aer Lingus slots at Heathrow.” Sinn Féin was “utterly opposed” to the sale.

He called on the party’s ardfheis in Derry to send out a clear message to the Government: “hands off our public service”.

“Ireland and its resources are not for sale at any price,” he said.

The problem with these “essentials” as the “Irish Tory alliance of Labour and Fine Gael Government sees it is that they cost money. They would rather use it to cut top rate of taxes, paying bank debt or buying the next election.”

Accusing the Government of pursuing an austerity agenda rigorously against public transport for the last four years, Mr Ellis said roads were crumbling and the public transport subvention had been cut, forcing Bus Éireann to cut routes.

He reminded delegates that roads “have begun to be claimed by potholes once again” not seen since the 1980s when government TDs lost their seats.

Public transport companies had struggled to maintain much needed services and had been forced to increase prices.

He said Sinn Féin in government will protect public transport services and “where routes are economically and socially important they will receive government support”.

Mr Ellis said profit could not be allowed “to be the decision making factor in whether we allow rural Ireland to thrive or decline further”.

Ireland needed the Aer Lingus slots at Heathrow airport and needed to protect the jobs they provided.

Former Aer Lingus chief executive Willie Walsh “made clear that he needs slots for IAG to service expanding market for South American and the Far East” and “Ireland will suffer if we do sell them to him”.

He said “we cannot risk these jobs and we cannot throw away our connectivity and put more jobs at risk”.