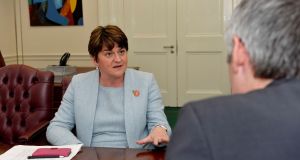 First Minister Arlene Foster speaking to the media at Stormont Castle in Belfast, as she has aimed a stinging broadside at the Government’s all-Ireland Brexit forum. Photograph: Press Eye/PA Wire

Stormont’s First Minister has aimed a stinging broadside at the Government’s all-Ireland Brexit forum, insisting she had better things to do than listen to a lot of “grandstanding remoaners”.

Democratic Unionist leader Arlene Foster has already declined an invite to attend next week’s “civic dialogue” event in Dublin, which has been organised by Taoiseach Enda Kenny to discuss the fall-out from the referendum result.

Explaining her reason for staying away, Mrs Foster, a Brexiteer, portrayed the gathering as little more than a talking shop for those who refuse to accept the UK is leaving the EU.

“It will be full of people who quite frankly haven’t accepted the referendum result going down to talk about how dreadful it is and how awful it is.

“Mark my words that’s exactly what will happen at the grandstanding forum that will come about.

“I’m not going to be a part of that. I am in this to do real business and to have outcomes not to sit around talking about how dreadful it is.”

Mr Kenny has said the event will facilitate an all-Ireland conversation among the business community, wider civic society and politicians.

Other unionist parties in Northern Ireland are also set to stay away from the day-long event in Dublin.

Asked whether it would not be valuable to put the argument for Brexit to forum delegates, Mrs Foster responded: “To be a lone voice amongst a whole lot of remoaners? No thank you — I have better things to do with my time.”

Mrs Foster, who will address her first DUP autumn conference as leader on Saturday, has insisted the current north-south political structures are the appropriate places to raise issues around Brexit.

On the wider issue, the First Minister said economic data indicated that “gloomy predictions” in the wake of June’s vote had proved unfounded.

She acknowledged some people were unsettled by what the decision would mean for the border, but she insisted political leaders in London, Belfast and Dublin were committed to secure “maximum movement” for people, good and services post-Brexit.

Mrs Foster also rubbished the suggestion that the United Kingdom had been weakened by Brexit.

She highlighted Northern Ireland’s link with Great Britain was more important, in trading terms, than relations with all of the European Union and branded moves for a second Scottish independence referendum as just “noise” that was unlikely to lead to an actual vote.

“So the Union (UK) is critical for us in Northern Ireland and we shouldn’t away from that and as unionist I would never shy away from that,” she said.