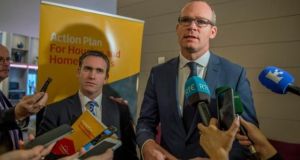 Defending the first-time buyers support package announced in the budget last week, Simon Coveney said it is a measure to deal with the “viability gap” in the market. Photograph: Brenda Fitzsimons/The Irish Times

Only 760 of the 38,000 new houses sold last year were bought by first-time buyers Minister for Housing Simon Coveney has said.

Defending the first-time buyers support package announced in the budget last week, he said it is a measure to deal with the “viability gap” in the market.

Under the help-to-buy scheme, first-time buyers can apply for a rebate of income tax paid over four completed tax years prior to purchase, up to 5 per cent of the value of the home, or €20,000, whichever is the lesser, on houses to the value of €600,000.

The properties bought must either be newly built or self-built by the first-time buyers, and the buyers must have signed a contract on or after July 19th last, or, in the case of self-builds, drawn down the first tranche of their mortgage on or after that date.

On Thursday, a change was made to the scheme through the Finance Bill which will see those availing of the scheme now take out a mortgage of at least 70 per cent, down from the 80 per cent announced on budget day.

Mr Coveney said that the core issue in realtion to first-time buyers is an entire generation locked out of being able to buy a home for themselves. Mr Coveney said they are unable to raise enough money for a deposit of €20,000 or €30,000 while surviving in the private rental market with increasing rents.

When asked how much the scheme will cost, he said the Department of Finance had estimated it at €50million next year.

“To put that into context we will be spending €1.3billion on housing driving supply next year, so this is a relatively small measure.

“I put a rough figure of between 4,000 and 6,000 people next year will benefit from that. Hopefully more. There is a potential for a lot more,” he said.

Mr Coveney also explained the changes made in the Finance Bill published on Thursday.

Mr Coveney said the change was not a restriction but would allow more people to qualify for the scheme.

“The suggestion came from the Central Bank, and the Department of Finance agreed. And I agree with it. This is about getting assistance for first-time buyers.

“When following through with a Finance Bill it is normal that adjustments be made. If we hear good suggestions from the Opposition that make sense then Michael Noonan might consider them.”

Mr Coveney said there would be few first-time buyers, who would pay more than €400,000 for a property.

“The number of first-time buyers that are going to be buying properties for over half a million euros are negligible. I’d say you could count them on one hand.

He said the majority of people who would benefit from the scheme would be those buying properties between €200,000 and €350,000.

He also said the scheme had been welcomed by property developers.

“We’re hearing developer after developer now saying that because of this measure there is more confidence in building for first-time buyers. A lot of developers planning to build 20, or 30, or 40 houses next year may now be looking at doubling or trebling that number. Because they more confident that can sell the property.”

Speaking to RTÉ’s Morning Ireland, Mr Coveney said that the scheme would not be extended to “second-hand houses” as there is not enough supply in that market.

“To increase demand in a finite market would only put more pressure on increasing prices,” he said.