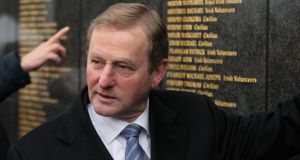 Mr Kenny has also confirmed he is to meet Fianna Fáil leader Micheál Martin on Wednesday to discuss formation of Government.

Mr Kenny told the 15 Independent TDs he would hold a meeting with Mr Martin after the vote for Taoiseach is held in the Dáil.

The document, which Mr Kenny also presented to the Fine Gael parliamentary party on Tuesday, commits to meeting the target of 25,000 new homes needed every year by 2020.

The Fine Gael document commits to setting out a Spring Statement in April on the Budget parameters.

It says it will present a tax strategy by July and August and present the draft allocation of expenditures by September.

The party document also commits to establishing an Oireachtas Budget Office and a new Dáil Committee on Budget and Finance.

The document commits to appointing a Minister for Housing within 100 days in office.

The document also commits to a citizen assembly look at the eighth amendment and fixed term parliaments.

It also proposed to implement the Manning report on Seanad reform as a priority.

In the justice area, the party proposes further investment in the Garda fleet and new and refurbished Garda stations throughout the country.

The documents says Fine Gael will not close any small schools without the consent of parents. It says the party will examine offering motor tax services and other State services in post offices.

“We will establish a working group to identify the potential for local post offices to act as ‘hubs’ to facilitate other services such as health and transport,” it says.

“We will maintain the option of payments at Post Offices.

“We will also support the establishment of a post office network renewal process to build on An Post’s existing five-year strategy for the network.”

This is said to be an attempt to woo rural TDs to supporting a Fine Gael Government.

In a message to his parliamentary party, Mr Kenny said: “This draft document is not designed to cover all the policy areas that a Programme for Government would.

“I have asked the Independents to reflect on its content overnight and we agreed to meet again tomorrow morning to agree that the draft document is a fair reflection of the issues as they were discussed and the observations and contributions of all those around the table.”

Mr Kenny has also requested a further meeting with the Independents on Wednesday morning.

Mr O’Dea told Newstalk radio that the Independent TDs could be put of their misery if they declared for a party leader in the vote for Taoiseach on Wednesday.

He said the Independents sat on their hands on the last occasion but could speed the process up if they decided.

He said this was a spanner being thrown in from the outside and was not helpful to the process.

Mr Moran said: “Willie is feeling left out because he is not involved in the negtotiations. Willie has himself been part of a Government that made huge mistakes and that is one thing the Independents will not do.

Fifteen Independent TDs have been meeting with Fine Gael and Fianna Fáil over the past two weeks to try form a government.

However none are expected to declare for either party in the vote taking place tomorrow.

Sinn Féin has insisted it will not engage in the “charade” of formation of government and criticised Independents for participating in the discussions.

Mr Adams said the two parties are engaged in a “phoney war” and the current talks are pointless.

Mr Adams said: “Fianna Fáil and Fine Gael have the numbers to form a government.

“But instead of engaging in meaningful talks Fianna Fáil have protracted a phoney war with Fine Gael and seem determined to put the Dáil through another vote for Taoiseach tomorrow which cannot possibly succeed.

“If they cannot facilitate or be part of a new government, then clearly another election is the only option. Fine Gael and Fianna Fáil need to accept that this is a likely consequence of their protracted play action.”