Sligo-Leitrim Senator was elected on the 15th count 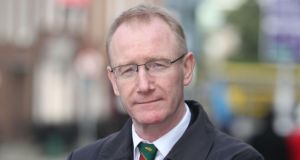 Frank Feighan (57) who served as a TD for the then Roscommon-South Leitrim constituency from 2007 to 2016, was not the bookies’ favourite this time round.

The newly elected TD is a native of Boyle, Co Roscommon, now living in Sligo; when north Roscommon was included in the Sligo-Leitrim constituency, and after the withdrawal from the race of former TD Gerry Reynolds, he seized the opportunity.

His interest in business was nurtured in Boyle, where he was reared over the family’s shop, McDonagh’s newsagent.

Feighan, who knows the high and lows of politics, did not run in the last general election as he believed that public reaction to his stance on the closure of the A&E department of Roscommon Hospital meant he would not take the seat.

The lowest point for him came when he received an anonymous letter hand-delivered to his Boyle constituency office containing a sinister death threat, a development which caused great upset for himself and his family.

He has served as a Senator since 2016, having been nominated by the Taoiseach, and he is currently the co-chair of the British Irish Parliamentary Assembly. He is also a member of the Committee on the Implementation of the Good Friday Agreement.

Feighan and his wife Elaine have two children, Francesca (3) and MacDara, who is just three months.

As the count continued over two days in Sligo-Leitrim and uncertainty continued over whether he or Fianna Fáil’s Eamon Scanlon would take the final seat, Feighan said that after 20 years in politics he had learned to be philosophical.

“Whatever will be will be,” he said.