Election 2016: The relentless rise of the Independents

Informal alliance may be on the cards, though formation of cohesive group unlikely

Independent TD Seán Canney tops the poll in Galway East and does not rule out playing a role in government. Video: Ray Ryan 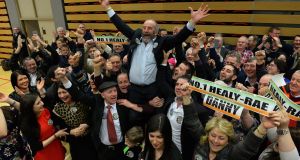 Danny Healy-Rae and his brother Michael (on the floor ) are in fine form as Danny claimed the second seat in Kerry.

The Independents elected to the new Dáil are unlikely to influence the shaping of the next government, despite the pre-election consensus that they could be the powerbrokers.

With the numbers pointing to some kind of Fine Gael-Fianna Fáil arrangement, it is likely the large cohort of Independent TDs will have to be satisfied with being be a vocal and effective voice from the Opposition benches.

While there may be an informal alliance to maximise parliamentary advantage, there is little prospect of them forming a cohesive group.

They vary in outlook and background. Independents such as Mick Wallace from Wexford, Clare Daly from Dublin Fingal, and Joan Collins, who was relected in Dublin South Central, are left-of-centre politicians, having little in common with the pragmatism of some of their fellow Independents from rural constituencies.

They would shun the kind of constituency deals some of the rural Independents have done with minority governments in the past and are available to do in the future.

An impressive addition to their ranks is Galway East Independent Sean Canney whose hard work in painstakingly building a base in the constituency finally paid off. He polled 5,567 first preferences in the 2011 general election and secured 1.7 quotas, 3,171 first preferences, in the Tuam area in the local elections.

The most spectacular performance by Independents was in the new five-seat Kerry constituency where councillor Danny Healy-Rae joined his brother, sitting TD Michael, in the Dáil.

Following his election, Michael Healy-Rae could not resist taking a swipe at his urban critics.

“Some of the smart-alecs above in Dublin who were picking at me before will have to pick at Danny first before they get to me,’’ he said.

The astonishing performance by the brothers was due to a seven-day schedule of hard work on behalf of their constituents. They have set the bar high in terms of constituency service but there is little doubt locally about their ability to sustain their work rate and retain the two seats in the long-term.

Like their late father, Jackie Healy-Rae, they will be Independent “loners’’ in the Dáil.

So, too, will Independent Mattie McGrath, who retained his seat in the Tipperary five-seater.

Like the Healy-Rae brothers, he comes from the Fianna Fáil “gene pool’’, having left the party some years ago and never, it seems, to return.

Tipperary also saw the unsurprising re-election of Independent TD Michael Lowry at the top of the poll with 13,064 first preferences. Although frequently embroiled in controversy, he continues to have a secure electoral base in his home county.

The decline of rural Ireland was the issue which elected Dr Michael Harty who ran on the slogan “no GP, no village’’, securing 8,629 first preferences in Clare.

His five-week campaign saw him comfortably take a seat as voters expressed their frustration with what they saw as the neglect of rural communities throughout the constituency.

Community involvement led to the election of Independent Michael Collins in the Cork South West three-seater. His 2014 local election performance - when he secured a seat in the West Cork electoral area with 3,409 first preferences - showed he would be a force to be reckoned with in the general election.

Frustration with the lack of development in his local community prompted him to run for the local elections and eventually led him to the Dáil.

Independent TD Michael Fitzmaurice, who retained his seat in the Roscommon-Galway three-seater, is a champion of rural Ireland who is likely to find common cause with Collins and other rural TDs.

Independent Waterford TD John Halligan, who retained his seat, is regarded as left-of-centre but has an easy rapport with rural TDs calling for action to deal with the decline of their communities.

The many years Independent Kevin “Boxer’’ Moran spent building a base in Longford-Westmeath paid off, when he polled an impressive 7,585 first preferences and went on to win a seat in the four-seater.

Independent Maureen O’Sullivan had conceded defeat in Dublin Central and gone home to lick her wounds when her fortunes changed. She returned to the count centre to discover she had pipped Social Democrats candidate Gary Gannon for the last seat in the 11th and final count.

“I know what Lazarus felt like,’’ she said, as she savoured the sweet taste of an unexpected victory.