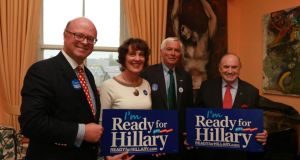 It was a dank, wet evening on Dublin’s leafy Raglan Road last night, but that didn’t stop 80 guests filing into Fitzroy House for an evening of chat and entertainment in aid of Hillary Clinton’s candidacy for the US presidential election in 2016, which she has yet to declare for.

Guests called to the home of Brian Farren and Linda O’Shea Farren for the event, which was organised by Brian O’Dwyer, a New York lawyer and a prominent figure in the Irish-American community.

National Concert Hall pianist John O’Conor attended the event, and Ms O’Shea Farren said she hoped he would “give us a few bars” before the night was out.

She said the guests were “an array of people across all ages, a great cross-section of society, which is the point of this kind of gathering: to show the support for Hillary in the hope it will be the push to get her to declare”.

“It’s a lot of Irish people who are American citizens, but aren’t particularly well known, but this is part of the point of this – to get more of a grassroots movement going behind Hillary, that it’s not all celebrities. We want people that are going to vote for her.”

Mr O’Dwyer addressed the crowd, urging guests to ensure they were registered to vote “because there is more to elections than money”. He is a member of the national finance committee of Ready for Hillary, a grassroots movement encouraging the former US secretary of state to run for president.

To be eligible to donate, you must be a US citizen or Green Card holder. Guests eligible to donate last night contributed $1,000 or $5,000. Ms O’Shea Farren said she and her husband had lived in the United States during the presidency of Bill Clinton and were throwing their support behind Ms Clinton because “it’s now Hillary’s time”.

Mr Clinton attended a similar event hosted by the couple at their Ballsbridge home in November 2007, as part of Ms Clinton’s unsuccessful 2008 campaign for the Democratic nomination for the presidency.