Coalition accused of trying to buy election in tax move 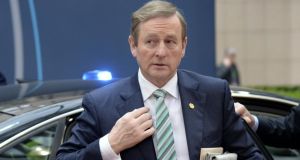 Taoiseach Enda Kenny talks of tax cuts on the back of successful negotiations with the commission. Photograph: Thierry Charlier/AFP/Getty Images

The Government has been accused of preparing to buy the next election as it steps up its efforts to have the European Commission’s strict fiscal rules relaxed.

In a clear sign of an escalating campaign, Taoiseach Enda Kenny raised the prospect of further tax cuts in October’s budget on the back of successful negotiations with the commission on the issue.

“Hopefully we can continue to reduce the taxation burden so that people next year will continue to see another modest increase in their take-home pay,” he said at the end of the second day of the European Union summit in Brussels yesterday.

“We accept the rules of the European Commission, but the fact that we’re in a very different position than we were four years ago; how best can we interpret the rules with the commission.”

Fianna Fáil and Sinn Féin described the campaign as a clear attempt by the Government to be allowed to draft a giveaway electoral budget in October and both warned of its consequences.

The rules set deficit targets based on growth figures averaged over 10 years. As a result the impact of the strong growth figures of 2014 and 2015 is greatly reduced. This will mean the Government will have far less flexibility on spending increases and tax cuts in the October budget.

Sources say the Government is getting political support to adjust the rules and still allow a 2 per cent deficit target to be met. Ideally the issue needs to be sorted out before the Government publishes its spring economic statement at the end of April as this will include detailed forecasts for 2016.

Mr McGrath said Government efforts to secure flexibility for additional spending must be seen in the context of the next budget.

“This is a pre-election budget and it would be appropriate that the IFAC would be consulted as to whether any additional flexibility should be sought,” he said.

“Otherwise the suspicion has to be the Government is loosening the purse strings in the immediate run-up to an election.”

Sinn Féin finance spokesman Pearse Doherty said he had long argued for a relaxation of the fiscal rule.

He said it was an “embarrassment” to see Mr Noonan, as one of the architects of the fiscal treaty, asking other members to relax the rules he helped draw up.

The need for member states to proceed with structural reforms was emphasised by ECB president Mario Draghi at yesterday morning’s closed-door meeting of EU leaders in Brussels.