Burton insists social welfare rates will not be cut in budget 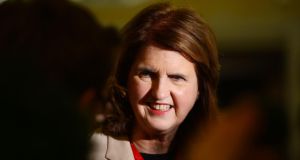 Minister for Social Protection Joan Burton has said social welfare rates will not be cut in the budget. Photograph: Alan Betson/THE IRISH TIMES.

Weekly social welfare rates will not be changed in the October’s budget, Minister for Social Protection Joan Burton has said.

She said “protecting core weekly rates makes absolute sense both for the individual families who receive welfare payments and for the economy generally.”

Ms Burton also said that the EU “needs a new approach, based on investment, growth and job creation – with full employment the overarching goal.”

Speaking last night at the Humbert School in Ballina Co Mayo, she said that “in recent months, I and others have been arguing that the limits of austerity have been reached at European level.”

She warned against cutting “too far and too deeply” where social welfare rates in Ireland were concerned. This was “because of the crucial importance of welfare expenditure, both in terms of preventing poverty and acting as an economic stabiliser.

Research shows that social transfers reduce the at-risk-of-poverty level in Ireland by more than 60 per cent - the most effective performance in the EU.”

It was “a key reason why this Government has protected core weekly welfare rates in successive budgets, and will do so again in this budget,” she said.

She also pointed out that “the spend of the department puts money in the tills of almost every business and shop in the State, as our customers spend their benefits and pensions each week, thereby maintaining domestic employment and economic activity.”

The importance of welfare “as a key tool for stabilising demand is recognised here and abroad, She said and noted that “the Secretary General of the Department of Finance, John Moran, made the point in a speech earlier this year that `supporting incomes of the most vulnerable and those who suddenly found themselves out of work’ acted as one of the automatic stabilisers that helped to `support economic activity during the downturn’.

More generally she said “the EU needs a new approach, based on investment, growth and job creation – with full employment the overarching goal. And I take great heart at the very basic rethink of economic philosophy that president Obama is leading in the US,” she said.

“This back-to-basics re-evaluation recognises the failure of the trickle-down approach that has been dominant since the 1970s. This was the notion promoted by the super-rich that if we protected them, their wealth would trickle down, and that would help everyone else prosper. The entire western world bought that line. “

Ms Burton added that “for three decades, governments of the right and centre, including those of Clinton and Blair, yielded to it. The results were great for the super-rich - and disastrous for everyone else. Inequality thrived. In 2008, the economy collapsed largely from the reckless activities that stemmed from that philosophy.”

“I think full employment is the number one objective in building a better Ireland beyond austerity. And while I share people’s frustration at the pace of progress, I firmly believe we are on the road to achieving that.”

But even with full employment, “we will need a strong welfare state to protect people at vulnerable times in their lives,” she said.

“We must strive for full employment, a fair wage in work and a fair level of protection based on contributions when not in work. The fourth leg of the chair would, of course, be to ensure that people have sufficient income in retirement,” she said.

The provision of such a system would “ensure that the recovered Ireland will not just be economically sound, but socially just. An Ireland where full employment is once again with reach, where workers earn a fair and equitable wage, where people feel secure in retirement, and where a basic fabric of decency runs through society.”

She concluded “it has been a long and painful road – and there are further tough steps yet to take – but I firmly believe we are heading in the right direction. It would be remiss of me here tonight if I didn’t mention the late Seamus Heaney. His most famous line – the line which resonated so profoundly with people across the world - was, of course, about hope and history rhyming. It is my firm conviction that we can make a strong economy and a fair society rhyme too.”