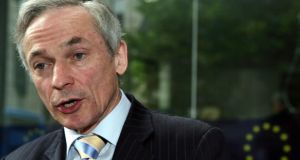 Minister for Jobs Richard Bruton sought to introduce generous tax breaks for executives in multinational companies in the run-up to Budget 2013, documents show.

The budget, published last December, contained controversial measures that allow executives on high salaries to move to Ireland and pay lower income tax rates, as well as benefit from relief on expenses such as trips home and private school fees.

The move prompted serious concern from the Revenue Commissioners, which felt it could be seen as unfair by the wider taxpaying population.

He requested Minister for Finance Michael Noonan to reduce the income tax rate to 23 per cent for eligible executives earning up to €500,000 per year.

This works out at an effective tax rate of 30 per cent, when the universal social charge is included. It would have cost the exchequer about €5 million to implement.

The key benefit, he said, was that senior executives within multinationals could be attracted to locate in Ireland.

’
“The multinational will then locate the jobs supporting the roles of senior executives and product/services leaders within Ireland.

“These follow-on jobs are clear wins for Ireland, as they represent additional internationally mobile jobs which would not otherwise have been located in Ireland,” he wrote.

Mr Bruton added that these supporting roles were typically filled by Irish workers and that additional taxes would mitigate the cost of the move.

The request, however, was not acted upon by Mr Noonan in last December’s budget.

Other documents released under the Freedom of Information Act indicate the sensitivity within Government circles over the perception that Irish tax laws are allowing multinationals pay tax at well below the official 12.5 per cent corporation tax rate.

Briefing material acknowledges that some large companies are able to pay little if any tax due to so-called “double Irish” tax structures.

But officials insist the Government has no role in facilitating this.

“It is not part of the Irish tax offering,” one Department of Finance briefing note reads, “ and it relies on arbitrage between the different tax rules used in different countries.”