All going to plan, Ireland will have same-sex marriages by Christmas

Couple will declare they are ‘spouses of each other’ 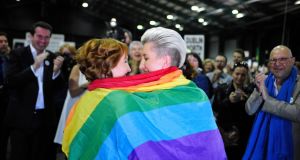 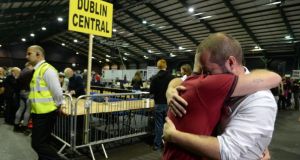 Michael Barron founder of BeLonG To with Jaime Nanci at the count centre at the RDS. Photograph: Cyril Byrne/The Irish Times

Preparations will begin within days to pass a law to give effect to the Constitutional amendment and allow same-sex couples to marry for the first time.

The resounding Yes vote will result in a new sentence being added to Article 41 of the Constitution. It reads: “Marriage may be contracted in accordance with law by two persons without distinction as to their sex.” The Irish version, which takes precedence, reads: “Féadfaidh beirt, gan beann ar a ngnéas, conradh pósta a dhéanamh de réir dlí.” It means that a marriage between two people of the same sex will now be recognised by the State and will have the same status under the Constitution as a marriage between a man and a woman.

To give effect to the amendment, the Oireachtas will enact the Marriage Bill 2015, which will state in law for the first time the principle that being of the same sex is no longer an impediment to marriage. Officials in the Department of Justice will begin drafting the legislation next week. A spokesman said the Bill would be prioritised with a view to it being passed by the Oireachtas before the summer recess.

The law will set out the practical changes to come. When it comes into force, two people getting married will declare that they accept each other as “husband and wife” or as “spouses of each other”. It will also state that a change of gender will have no effect on marriage.

The law will also make clear that religious solemnisers will not be obliged to solemnise the marriage of a same-sex couple, and that the same prohibited degrees of relationship will apply to same-sex marriages as to opposite-sex marriages.

When the Marriage Bill has been drafted, it will go to Cabinet for a formal sign-off. It will then be enacted by the Oireachtas - probably in July - before practical work is done on changing marriage forms and procedures. Finally, the Minister for Justice will sign a commencement order.

A three-month notice period for civil marriages means that, all going to plan, the first same-sex marriage in Ireland could take place before Christmas.