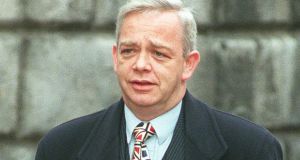 Jimmy Guerin, Brother of Veronica Guerin said: “Jurors should not be exposed to anything that is going to cause them to live in terror or in fear.” Photograph: Alan Betson

Sinn Féin president Gerry Adams yesterday appeared to downplay his party’s position on the abolition of the Special Criminal Court.

The party’s manifesto commits to repealing the Offences against the State Act which constitutes the court and outlaws the membership of illegal organisations.

However, in what is being seen as a softening of a position by the party he indicated it would not be a crucial part of any future coalition negotiations.

“It has been there for as long as I can remember. Is it a red line issue for us in the negotiating a programme for government?

“It is in our manifesto and we will deal with that obviously if we get a mandate .” Asked what the party would replace the legislation with Mr Adams said the “normal rule of law”.

Yesterday the family of Garda Jerry McCabe said proposals to abolish the court are irresponsible.

Pat Kearney, Garda McCabe’s brother-in-law, said it was his family’s position that the court should remain a part of the justice system.

“The court as it is constituted was an excellent place for such trials. I am all in favour of its retention. The judges are very experienced in matters of that nature and they are the best people to adjudicate. They know what they are doing.

“I don’t agree with any of those people making the call for its abolition. These trials can be complicated and convoluted and require the expertise of three judges.”

Four men were tried before the court for Garda McCabe’s murder in a botched armed raid by an IRA gang in 1996 in Adare, Co Limerick.

Jimmy Guerin, brother of murdered journalist Veronica Guerin, said the proposals by Sinn Féin are reckless. Mr Guerin said he sat through the various trials of criminals for the murder of his sister. While he never felt intimidated by Brian Meehan or John Gilligan – the men accused of her killing – he would never have allowed his wife, family member or friend to sit on the juries.

Mr Guerin said: “Jurors should not be exposed to anything that is going to cause them to live in terror or in fear. That was never part of the justice system.

“This thing of setting them up in rooms or putting them behind a window is terrifying. For the proper administration of justice the Special Criminal Court is an integral part of it.”

Brian Meehan (47), from Crumlin in Dublin, is serving a life sentence in Portlaoise prison having been convicted by the court of the murder of Ms Guerin in June 1996 . He was also jailed on drugs and firearms charges. Mr Guerin, who is running the general election as an Independent candidate, said the court’s decision not to convict Gilligan of Ms Guerin’s murder proved it always acted in a “fair and effective way”.

He said: “Gilligan was a hate figure; everyone wanted him to be convicted. Nearly 20 years on and it took me a long time to forgive those judges but when I stand back and examine it, I know justice was delivered.”