“I don’t care how rare the Pokemon is, it’s not worth your life!”

A driver who was playing Pokémon GO while behind the wheel crashes into an empty police car in Baltimore. Video: Baltimore PD 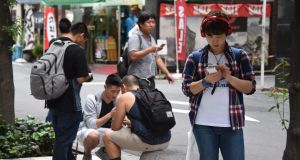 1. A woman playing Pokemon Go in a cemetery had to call emergency services to rescue her after she got stuck up a tree. Firefighters in Clarksboro, New Jersey, said the woman climbed the tree inside Eglington Cemetery as she attempted to “catch them all” while playing the game on her smartphone. Firefighters came to her rescue and said she was “a bit embarrassed at that point”, and they refused to release her name to spare her additional embarrassment.

2. Police launched a safety review after a Pokemon Go player had his phone snatched out of his hand by a passing cyclist. The victim, in his 20s, was playing on his Samsung Galaxy Edge when he noticed he was being watched by a cyclist in St John Street, in the City of London.As the man continued to play and walk in Charterhouse Street, the cyclist snatched the phone and rode off. The theft prompted police to conduct a review of the risks for players, including road safety and young people’s “vulnerabilities”. Detective Inspector Doug Blackwood said: “Be aware of what’s around you, and remember that using your mobile phone in public can make you an easy target for thieves. We would also urge people to behave in a safe and sensible manner and respect other peoples’ privacy and property. Not only does walking and texting at the same time leave you at risk of injury, it can also leave you vulnerable to becoming a victim of crime.”

3. A man reportedly jumped out into a busy dual carriageway while playing Pokemon Go in Co Down. Police said the incident happened on the A2 at Holywood on Thursday morning. Officers posted details on a Police Service of Northern Ireland Facebook page. “Already this morning we had a reports of a male jumping out in front of traffic on the A2, Holywood,” read the post on PSNI Ards page. “Can you guess why?? “I don’t care how rare the Pokemon is, it’s not worth your life.”

4. A live action movie franchise based on Japanese video game Pokemon has been confirmed. Legendary Entertainment, the media company behind Godzilla, Jurassic World and The Dark Knight Rises, has signed a deal with the Pokemon Company for the rights to create the feature films. Hollywood’s interest in Pokemon comes after its recent resurgence in popularity following the launch of successful new app Pokemon Go.

5. Film director Oliver Stone has branded Pokemon Go a “new level of invasion” of privacy that could lead to “totalitarianism”. The American reportedly voiced concerns over the game as he promoted his new movie about NSA whistleblower Edward Snowden at Comic Con International. Stone, 69, said companies were carrying out “surveillance capitalism” by monitoring people’s behaviour, after he was asked about security concerns associated with Pokemon Go. According to Time magazine, he told the Comic Con audience in San Diego: “It’s not funny. What’s happening is a new level of invasion. The profits are enormous here for places like Google. They’ve invested a huge amount of money in data mining-what you are buying, what you like, your behaviour. It’s what some people call surveillance capitalism.” He added: “You’ll see a new form of, frankly, a robot society. It’s what they call totalitarianism.”

6. Indonesian officials banned the playing of Pokemon Go from the presidential palace. Hastily printed warnings that say “Playing or hunting Pokemon prohibited in the palace area” have been put up around the palace complex in Jakarta. “This is the office of the president, not a playground,” said palace worker Bey Machmuddin. Last week, cabinet secretary Pramono Agung said he had captured a number of Pokemon at the palace, but some officials voiced concern the game could pose a security risk.

7. A Pokemon Go player took his desire to “catch them all” a step too far while behind the wheel when he crashed into a police car - and the whole incident was caught on an officer’s camera. Officers were standing on the pavement in Baltimore on Monday when the Toyota RAV-4 hit their car, which was just feet away from them, at speed. The driver admitted he was looking down playing Pokemon Go on his mobile phone when he hit the vehicle. In the video, the driver steps out and shows the officers his phone, saying: “That’s what I get for playing this dumb... game.”

8. Mountain safety experts said that while the game was a fun way of encouraging people to enjoy the outdoors it could pose risks. Heather Morning, mountain safety adviser with the Mountaineering Council of Scotland, said: “It is not difficult to imagine a situation where a Pokemon Go gamer finds themselves lost and unable to find their way back to safety. “It would be equally easy to see how someone could put themselves into danger focusing on their game rather than focusing on the ground in front of them.” She added: “It’s a fun game, and it does encourage folk to get out and about and enjoy the great outdoors with all the health benefits that brings. “However, gamers need to be aware if they are playing in an area that they are not familiar with - particularly in the mountains - that they should very much stay switched on to where they are and how to get themselves home safely.”