Woman only discovered she had won €5.3 million after broadband restored 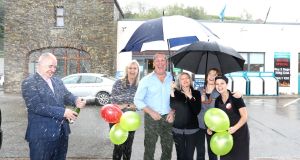 A woman has described how she only discovered she had won the Lotto 24 hours after the draw took place when her broadband service resumed after an all-day outage in her area.

Speaking at National Lottery headquarters on Friday where she picked up a cheque for €5,325,592 - the jackpot in last Saturday’s Lotto - she said she normally checked her tickets on the app or online pretty soon after each draw but she was unable to do so last Saturday night as she couldn’t get a broadband connection.

The following evening when the Munster woman got a message to say broadband was back she checked her ticket.

“I was gobsmacked when I saw the numbers match one of the panels on the ticket. I checked about 50 times that I didn’t make a mistake or that the dates were incorrect. I said to my husband ‘I think we won the Lotto’ and he didn’t even look up from the newspaper he was reading. Finally, he checked the ticket and low and behold, we haven’t had a wink of sleep since!”.

Asking to remain anonymous, she had a cup of tea as she picked up her cheque and said her family had “no immediate plans” for their windfall but will clear their mortgage.

“We’ll let the dust settle and maybe take a holiday over the coming months before we make any other spending decisions.”

She purchased her winning Lotto quick pick ticket at the Centra store on the Main Street in Innishannon, Co Cork.