Voice of Dolores O’Riordan fills church at her funeral 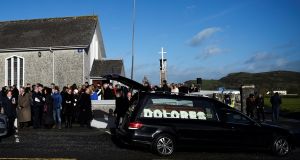 Mourners leave Dolores O’Riordan, the singer of the Cranberries’ funeral at St Ailbe’s Church in Ballybricken on Tuesday. Photograph: Reuters 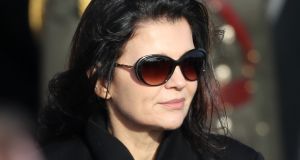 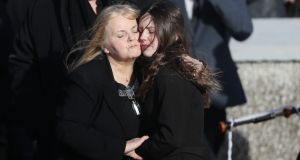 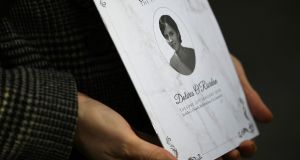 A mourner holds an order of service ahead of Dolores O’Riordan’s funeral at St Ailbe’s parish church in Ballybricken, Co Limerick on Tuesday. Photograph: Getty images 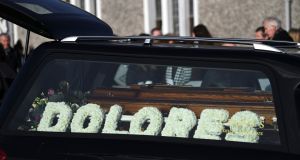 The coffin of singer Dolores O’Riordan, lies in a hearse after her funeral at St Ailbe’s Church in Ballybricken on Tuesday. Photograph: Reuters

The voice of Dolores O’Riordan filled a rural church in her hometown in Co Limerick as a funeral mass for the Cranberries singer began.

A duet of Ave Maria sung by O’Riordan and Luciano Pavarotti marked the start of the service in the Church of Saint Ailbe in Ballybricken.

The 46-year-old was found dead in a London hotel room last week.

Hundreds of people have gathered at the rural Co Limerick church to say goodbye to a singer renowned for her distinctive voice. The Cranberries enjoyed huge success in the 1990s with tracks including Zombie and Linger.

O’Riordan - who was also a member of alternative rock group DARK - had been working on a new studio album with The Cranberries in the months before her death. Her boyfriend and fellow DARK band member Ole Koretsky was among mourners.

Her former husband Don Burton was also in attendance.

Canon Liam McNamara said O’Riordan’s voice was worth its weight in gold. “Her kind personality and beautiful singing voice earned for her numerous admirers,” he said.

“It must be added that the numbers she rescued from the darkness of depression are impossible to count.

“No words are adequate to describe Dolores or to accurately state the influence for good she has been over the years.”

The service will be followed by a private family burial.

On Monday night, tea light candles lit the streets as family and close friends accompanied the singer’s remains to the church from Cross’s Funeral Home in Ballyneety.

President Michael D Higgins paid his sympathies to the singer’s family on Monday and signed a book of condolence.

“It was very important to pay tribute to the contribution Dolores made,” said Mr Higgins. “It is so moving, so profoundly sad, that somebody so young is taken for us. “She was a star that shone bright from the very beginning,” he added.

At the outset of the mass, symbols associated with O’Riordan’s life were brought to the altar.

Her niece Eileen and a long-time friend brought forward a guitar and a platinum disc award. A picture of Our Lady of Dolours, after whom Dolores was named, was placed at the altar, as was a book of poetry.

Mourners then paused for a moment’s silence and a prayer before her sister Angela read a passage of scripture.

In his homily, Canon Liam McNamara recalled meeting the young O’Riordan in 1989 when she was singing and playing the keyboard in the church. “She did have a unique respect for everybody,” he said.

“Coupled with that respect, her kind, loving and generous heart made her a source of great hope to the Church, during its stormy years. For that we sincerely thank her from our hearts.”

He said the funeral mass was a difficult day not only for Ballybricken, but for the world. “Now she is singing in the heavenly choir - hymns of petition for us,” he said. Canon McNamara said O’Riordan had been reunited with loved ones in Heaven.

“If tears are shed in Heaven - by necessity they are tears of joy,” he said. “Yes, tears of joy, following an excellent performance by Dolores, in the most important and vital gig of all - the gig of life itself.”

During Communion, O’Riordan’s version of the hymn Panis Angelicus was played in the church. Archbishop of Cashel and Emly Kieran O’Reilly said: “Since we heard of the sudden death of Dolores O’Riordan, many hearts in Ireland and around the world are heavy with sadness on hearing the news.

“Indeed, the great outpouring of sympathy and love for Dolores which we have seen since her death is a witness and a tribute to her great musical talent and very special voice by her many fans and lovers of music. “Dolores put her God-given talents at the service of others.”

Archbishop O’Reilly hailed O’Riordan’s voice as “unique, far reaching and distinctly Irish”. “Her gifts have resonated in the lives of many and will continue to do so as her music and her songs will continue to be played and listened to,” he said.

At the close of the service, The Cranberries’ song When You Are Gone rang around the church as the singer’s coffin was carried to the adjacent graveyard for a private burial service. Mourners broke into a spontaneous round of applause.

Cranberries fans from around the world tuned into a local Limerick radio station on Tuesday morning as it broadcast the service live.

Sales and streams of The Cranberries’ back catalogue have rocketed by 1,000 per cent in the days since her death.

Greatest hits collection Stars: The Best Of 1992-2002 landed at number 16 on the albums chart this week, a higher position than its previous peak of number 20 when it was released in 2002. - PA