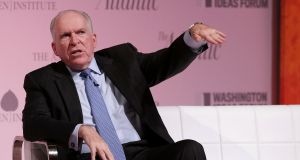 The director of the CIA has suggested the Republic may be a target for Islamic terrorism due to the prevalence of US multinationals there.

John Brennan, who succeeded David Petraeus as the head of the United States intelligence agency in 2013, said it was important for Irish authorities to be “vigilant” of the threats posed.

“I don’t think any country should feel immune from the reach of these terrorist organizations,” he said in an interview with Irish-American website Irish Central.

“Ireland first of all is an open and welcoming country, and also there are also a lot of Americans there and American businesses.

“I was in Ireland last August and I met with the Irish intelligence heads and talked to them about the importance of sharing information. If there is anything that looks or seems a bit off putting, those pieces of the puzzle need to be put together,” he said.

“Ireland as you know is part of the worldwide landscape where a lot of these (terrorist) groups look to see if they can exploit opportunities.

“There are a lot of people who travel to Ireland for tourism, business, education, and I do think it is important for all the intelligence and security services to be vigilant there.”