Customers will not be out of pocket as a result of computer issue, bank promises 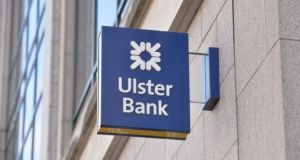 In some instances, customers have had their Ulster Bank credit and debit cards declined when making purchases. Photograph: Alan Betson

Human error was behind the disappearance of money, including monthly salaries, from the accounts of Ulster Bank customers over the weekend.

While the bank has now established the cause of the issue following an “urgent investigation” it is not expected to be resolved and money is not set to return to customer accounts until Wednesday morning at the earliest.

The bank issued an updated statement on Tuesday afternoon in which it said the problems arose as a result of a mistake by a staff member.

The Monday evening error meant a computer “payment file” was not processed last night “which means that some transactions applied to some customers accounts since 20th April are temporarily not showing.”

A spokeswoman said the bank had investigated the issue “as a matter of urgency and have already taken the necessary corrective action which will see recovery actions overnight.”

The bank denied any money had disappeared and said transactions were “temporarily not showing on accounts”.

The bank has told impacted customers who found their accounts overdrawn as a result of the problems they will not be out of pocket once the issue is resolved.

And it said it will be making emergency cash of up to €500 available to customers who need it.

Ulster Bank customers began reporting issues in significant numbers on Monday and hundreds of complaints were posted across social media networks from people who have had money apparently disappear from their accounts leaving them without the funds to pay direct debits which were due.

In others instances customers had their Ulster Bank credit and debit cards declined when making purchases.

Another asked what the bank was doing about the money disappearing from current accounts? “My April salary was paid last Friday but today it has disappeared,” he said.

“I have just had my card declined. I am getting no answer on the phone, every penny gone from both accounts. Ulster bank did not reach out to customers, I have direct debits due today and no money at all...as soon as this is sorted I am changing banks.”

At the end of March Ulster Bank also reported delays in payments being processed.

And a massive technical meltdown at Ulster Bank in 2012 left huge numbers of its customers without access to funds for weeks and led to the Central Bank imposing a fine on the bank of €5million for the IT failure.

Ulster Bank has stressed the most recent problem was not an IT failure and had no connection to the 2012 system issue.

Describing it as a “disgraceful situation” Sinn Féin’s finance spokesman Pearse Doherty called for the bank to appear before the Oireachtas Finance Committee while it was described as a “cause of serious concern” by Fianna Fail finance spokesman Michael McGrath.

He called for the Central Bank to “conduct a comprehensive review of the IT systems used by retail banks in Ireland”.

“It is very distressing for Ulster Bank customers to discover that money has gone missing from their bank account or that they may have had debit card transactions declined. In some cases, customers may well have missed vital payments as a result of the bank’s failure,” he said.

“Ulster Bank now needs to put its customers first. The bank’s immediate focus must be on fixing this problem and ensure that affected customers will not have their credit rating adversely affected in any way.”