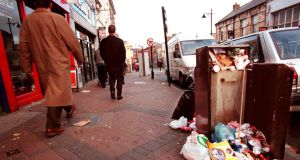 Statistics show that the level of unpaid litter fines rose from 45 per cent in 2011 to 52 per cent in 2012, before jumping to 64 per cent in the period between January and June 2013. Photograph: Eric Luke/The Irish Times

Almost two-thirds of litter fines issued by Dublin City Council in the first six months of the year went unpaid, leading one city councillor to call for those who litter to be “named and shamed” in a bid to increase compliance.

Figures released by the council show that of the 1,169 on-the- spot litter fines issued in the first six months of the year, just 26 per cent were paid while a further 10 per cent were successfully appealed.

Conversely, the level of prosecutions sought by Dublin City Council decreased in the same period.

‘Name and shame’
Labour councillor Jane Horgan-Jones has suggested that a “naming and shaming” mechanism similar to that operated by the Revenue Commissioners for tax defaulters could be adopted to help boost compliance among people fined for littering.

“Nobody is suggesting that littering or dumping is as serious as tax evasion, but by naming and shaming those who litter, they are less likely to just ignore the fine that comes through the door.

“It would also address the issue of repeat offenders who ignore the first notice and, when nothing happens, expect that they can get away with it again in the future.”

She said such a move would be “resource- light” but noted it would require legislative change due to data protection constraints. “I think there’s a culture of non-compliance with fines at the moment which is borne out by these figures. But prosecuting every fine which isn’t paid would be a huge drain on resources in the current financial climate, so I think we need to think outside the box when it comes to encouraging compliance.”

Ms Horgan-Jones noted that if the 3,204 litter fines which went unpaid between 2011 and mid-2013 had been paid, it would have resulted in over €480,000 in additional revenue for the council, money which, she said, could be spend on street- cleaning or addressing illegal dumping.

Engaging communities
A spokesman for Dublin City Council said it placed a priority on street-cleaning and operated extensive street-cleaning services as well as a number of initiatives to engage communities in reducing litter - including the City Neighbourhoods Awards and the Adopt a Street initiative.

“There is no excuse for littering and fines do play a role - and it is important that those who seek to litter the city are pursued vigorously, but ultimately the real solution lies in working in partnership with the community to keep our city clean,” the spokesman said.