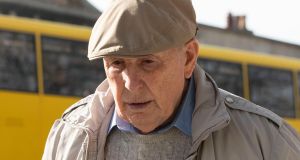 Michael Shine has been investigated and put on trial for cases stretching back to the mid-1960s. Photograph: Collins Courts

The jailing on Monday of Michael Shine for four years marks the culmination of a series of legal battles involving the disgraced former surgeon going back decades.

Shine has been investigated and put on trial for cases stretching back to the mid-1960s, but he continued to work in his private clinic and Our Lady of Lourdes Hospital, Drogheda, until the mid-1990s. By the time he retired, he had already been accused of the indecent assaults which would lead to his first trial.

He was acquitted on these indecent assault charges in 2003, almost a decade after he had first been interviewed by gardaí. Shine aggressively defended himself during the trial, saying that the allegations “were tied up with compensation, the malignancy of compensation”.

It took a further 13 years for his name to be struck off the medical register, following an investigation into complaints made by patients who were children between 1964 and 1994. While it would be almost another decade before Shine would eventually be convicted of any offences, victims pursued other avenues. Many made complaints to the Garda, while some initiated civil cases in the High Court.

A compensation fund was set aside for his victims as long ago as 1997, by the Medical Missionaries of Mary, which ran the hospital in Drogheda. The hospital has, on occasion, paid out tens of thousands of euro to complainants with no admission of liability.

In 2012, more than 100 patients settled a case with the insurers of the Medical Missionaries of Mary for a reported €8 million. In 2018, a further 100 lawsuits against the former surgeon went into mediation.

By 2011, more than 200 patients had come forward alleging abuse. That year, then minister for health James Reilly told an Oireachtas committee that he wanted to establish a public inquiry into alleged sexual assaults by Shine. However, when the referendum on strengthening Oireachtas committee powers failed to pass, hopes for an inquiry faded.

In November 2017, Shine was convicted of indecently assaulting two young male patients in the mid-1970s. He was granted bail pending an appeal against this conviction.

Following his sentencing on Monday, the victim support group Dignity 4 Patients, which has for years campaigned on the Shine case, expressed the hope that his jailing would “bring some degree of justice and consolation” to the patients who had suffered from abuse.

The campaign group renewed its call for “a full public inquiry into the sexual abuse of patients in this and other cases and we repeat that call today”.