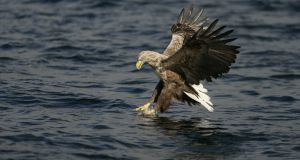 The first white-tailed sea eagle to fledge in Co Cork in over 125 years has been spotted flying around Garnish Island at Glengarriff in Bantry Bay.

Christy Dorgan, a birdwatcher who has written about the species in his latest guide to Irish birds, estimates the eagle, which left its nest on Garnish two weeks ago, is 12 weeks old. It is the first success in a sea eagle breeding programme on the island which began four years ago.

“It’s fledged and is flying around the island. There was a sea eagle that nearly fledged last year but it choked on a feather and died,” he said. “This bird is the first sea eagle to fledge in Co Cork in over 125 years so it’s fantastic news.”

His interest in birdwatching dates from his childhood in Fermoy where he would borrow books on English birds from the local library and head out into the nearby woods with friends to search for nests and try to identify the various species from the eggs that they found.

“It started when I was ten years old and I have never lost my love of birds since - I am mesmerised by them,” he said..

Mr Dorgan has compiled a new guide book Irish Birds – Their Nests and Eggs which features striking illustrations of over 100 species.

“The book is a labour of love – I have been collecting old books for 40 years and I’ve used coloured lithographs from the 19th century, which are out of copyright, to illustrate the birds. And each is accompanied by a short description of the bird,” he said.

He believes that the bird population here is starting to expand after decades of contraction due to use of pesticides.

“We have lost a lot of birds or at least their numbers have dropped - when I was a young fellow the waterhen or the moorhen were everywhere here in Fermoy whereas now they are only a couple of pairs but against that we are privileged now to have birds that weren’t here when I was a kid.

“Take the buzzard for example. When i was growing up there were no buzzards , there were a pair up in Co Antrim but they’ve gradually progressed down and I regularly see them here in Fermoy -the sight of a buzzard circling would make the hair stand on the back of your neck.

“Buzzards just didn’t exist in Ireland but if you see a few of them circling on the updraft and if you got a good pair of binoculars and you see the colour of them underneath, the lovely dark browns and the greyey whites and the patterns are stunning , it’s the most wonderful thing to see.”