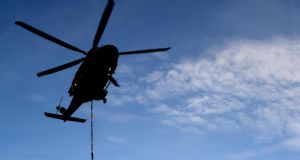 The man was initially treated on board by a doctor but following a further assessment of his injuries, it was decided he should be evacuated for medical treatment. Photograph: David Sleator/The Irish Times.

An injured Russian fisherman is recovering in hospital in Cork having been airlifted from a Russian factory ship off the south west coast on Tuesday evening.

The man suffered serious hand injuries on board the factory ship, Starry Arabat some 321km west of Slea Head just before midday on Tuesday.

The man was initially treated on board by a doctor but following a further assessment of his injuries, it was decided he should be evacuated for medical treatment.

The Irish Coastguard co-ordinated the operation from its base at Valentia and the Sikorski helicopter. Rescue 115 from Shannon proceeded to the scene.

The injured man was airlifted from the ship by the helicopter at around 6pm and taken to Cork Airport. From there he was transferred to Cork University Hospital.

Surgeons at CUH carried out emergency surgery last night to save the man’s hand and he is recovering in hospital on Wednesday morning.