‘To me broadband is as important to rural areas as electricity,’ says TD Stephen Donnelly 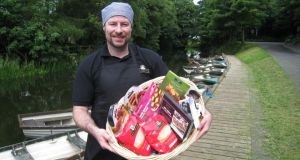 Jason Coyle, director of Mr Crumb food export business in Finea, Co Westmeath: “We have broadband, but not broadband of the capability or the capacity to run a modern business the way it should.”

Every second Friday, Independent TD Stephen Donnelly hosts a meeting of interested parties, businesses and residential, solely on the issue of broadband.

Wicklow, which he represents, is a microcosm of the whole country – the closer to Dublin, the higher the broadband speeds, but parts of the county are mountainous and remote. When it comes to broadband it is a two-tier county in a two-tier country.

Recently, Mr Donnelly has been involved in a committee to try and bring some high-tech companies to a recently acquired IDA site outside Greystones. One of the potential clients is involved with the European Space Agency.

“We asked them what they needed. Straight away they said they needed fibre [optic cables] and a redundancy [ie a fallback system] and a further redundancy,” he said.

“To me, broadband is as important to rural areas as electricity. It’s that important. I hear some of the questions being asked by TDs at committee to the effect that it would be too expensive to bring broadband to certain places.

“Anybody who says that is just living in a different century. They simply do not understand where the world has gone. It’s like asking how important it is to get water or electricity to a house. It is vital for education, economic and social development.”

Three years ago, Ashford Studios was set up in the Wicklow village of the same name. The investment of €22 million was a leap of faith which yielded immediate dividends. The studio secured the first and second series of Vikings.

The importance of broadband has grown exponentially even in the years since the studio opened. Production companies assume that high-speed broadband is available.

There is no fibre option available so the studio has satellite broadband installed at a huge expense. “It’s one thing for us to put that in, but I can’t imagine how local businesses thrive without a good connection,” said Shelly O’Connell, who runs the studio along with her father and founder Joe O’Connell.

“There are people who might want to rent office space in Ashford who may not rent because of the lack of broadband.”

The map provided by the Department of Communications, Energy and Natural Resources to show Ireland’s digital divide is a high-tech analysis of a low- tech problem.

Every one of the 50,000 townlands and 2.3 million residential and business premises in the State have been mapped down to the last house at the end of the last boreen. The places in blue are to have broadband provided by the commercial sector by the end of 2016; the places in amber will have to be served by the State.

Many businesses can hardly wait that long. As Minister for Communications Alex White has pointed out, they want high-speed broadband “yesterday”, but he has called for patience.

Pat Spillane, the former Kerry footballer, was chairman of the report of the Commission for the Economic Development of Rural Areas.

The commission, set up in response to the crisis in rural Ireland occasioned by the collapse of the Celtic Tiger, identified the absence of broadband as an impediment to job creation.

“If I heard one story about rural broadband I heard a hundred about how, if businesses had proper broadband service, they could create employment. The potential is huge. It’s absolutely massive,” he said.

Irish Rural Network chief executive Seamus Boland commended the Government for at least getting an accurate measure of the problem before dealing with it.

“The Government is now recognising that the coverage is rubbish. The existing businesses are now in a situation where, in order to compete, they need the 90Mbps speeds that they didn’t think they needed five years ago.

“If we don’t get this in place we will lose jobs from where we are at the moment because businesses will move into Dublin or the places where there is broadband.”

The network estimates some 10,000 jobs could be created immediately in rural areas just by having a universal high-speed broadband network, but says this may be an underestimate.

“Rural Ireland needs to diversify its employment opportunities which can only be done by providing proper infrastructure such as broadband, transport etc. Ireland is moving towards e-commerce and rural Ireland is being left behind.”

The Irish Creamery Milk Suppliers’ Association (ICMSA) maintains farmers, the backbone of any rural community, are becoming increasingly inconvenienced by the absence of broadband. The Department of Agriculture wants farmers to fill out many forms online irrespective of whether they can do so or not.

ICMSA chairman of farm and rural services committee Patrick Rohan points out that a lot of farmers who have broadband trade machinery on Donedeal. com, disadvantaging those farmers who have none.

“It’s a fundamental requirement if the various rural initiatives and spatial development plans are going to ever get past vague aspiration and become something meaningful.”

Broadband is not just a professional imperative, he points out, but a major disadvantage for families in rural areas.

“No less than anyone else farm families need the access to utilities, services, education, commercial concerns – even the social opportunities for young people – represented by broadband.

“Just to take one example, banking, the contraction of banking services in rural areas is very well marked and has now reached the extent where banks have disappeared from even medium-sized towns in well-populated areas of Munster and Leinster. ”