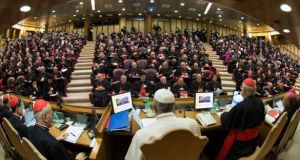 South African cardinal Wilfred Napier, said a paper calling for greater inclusivity towards homosexuals had been published at last year’s synod without prior knowledge of many. Photograph: AFP/Getty Images

Senior conservative cardinals have complained that efforts are being made at the Synod of Bishops in Rome to guarantee liberal-sounding “pre-cooked” policy declarations emerge from the gathering.

A letter to Pope Francis, signed by up to nine cardinals, expressed concern about “procedural processes”, saying that interim papers in the past had not always properly reflected the discussions.

Speaking to The Irish Times, one of the signatories, South African cardinal Wilfred Napier, said a document calling for greater inclusivity towards homosexuals had been published at last year’s synod without the prior knowledge of many.

“You guys,” he said, addressing the media, “knew all about that document before we did . . . I recall too that one or two synod fathers had said things in the synod [about the pastoral approach to homosexuals] and that was presented as if the whole synod had taken that stance,” he said.

“Certainly, no one must have the suspicions of last time, namely that the final message has been pre-cooked and we are just coming here to waste our time,” he said.

In their letter, released on Monday on the website of Sandro Magister, an Italian religious affairs journalist closely linked to conservatives, the cardinals expressed their concern that the “new process seems designed to facilitate predetermined results on important disputed questions”.