Dublin City Council have unveiled the most radical changes to the city's traffic flow in years. Tim O'Brien reports.

The “most radical” changes to transport in the centre of Dublin, including restrictions on private cars and taxis, while adding wider footpaths and more pedestrianised streets, have been proposed by Dublin City Council.

The study also envisages “improvements in the public realm” such as traffic restricted civic spaces at College Green and between the top of Grafton Street and the top of Dawson Street where illustrations indicate people dining on what is now road space.

The core study is aimed at radically altering two major transport corridors through the city, east-west along the quays, and from College Green to Parnell Square.

Traffic planners say these route are in parts like “six lane highways” severing access within the city. The study proposes “through traffic” would be diverted to more orbital routes.

The proposals, which were drawn up with the aid of the National Transport Authority will from Thursday be available for consultation by members of the public and interested parties in the city’s libraries and on the city council website. Some of the measures are already included within the City Development Plan but others will require approval or the city councillors while a further cohort may require planning permission.

But according to transport planner Brendan O’Brien of Dublin City Council some of the traffic restrictions, particularly those which will result from the installation of the cross city Luas line, will begin to be seen over the next two years. 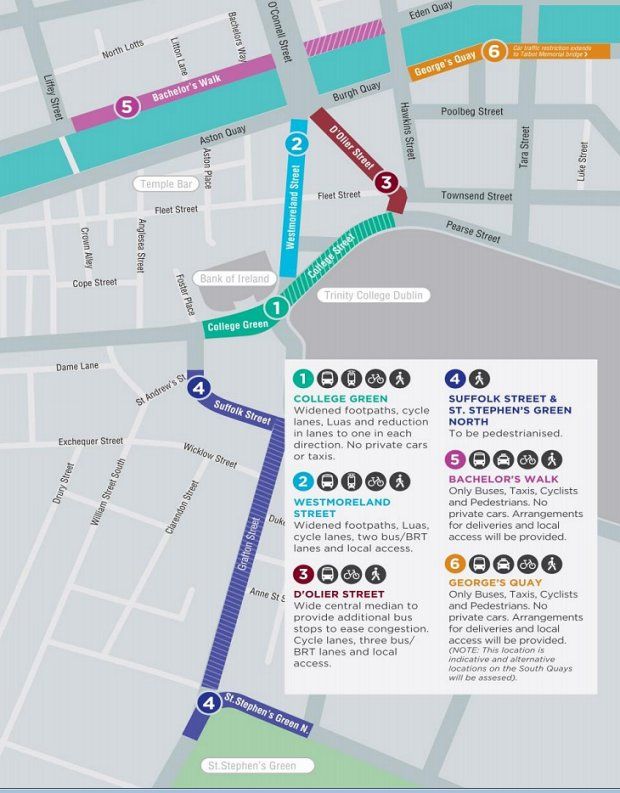 In advance of the new Luas line opening traffic travelling from St Stephen’s Green down Dawson Street will only be allowed as far as the Molesworth Street. The study also proposes extending the Grafton Street pedestrianised area to include Suffolk Street, eliminating current access for buses, taxis and cyclists.

The study proposes extending the current “bus gate” at College Green to exclude cars, vans and taxis on a 24-hour basis, restricting the street permanently to Luas, buses, cyclists and pedestrians and developing a much-enhanced civic space in front of Trinity College.

Across O’Connell Bridge the current two lanes of traffic turning right to Eden Quay will be reduced to one lane for public transport and bicycles only, on the opening of Luas. The right turn from O’Connell Street to Cathal Brugha Street will also be closed.

D’ Olier street is to be designated a transport interchange for movement between city buses, buses on rapid transit corridors, walking and cycling and Luas. A new central median to accommodate additional bus stops would be introduced as well as segregated cycle lanes and ready access to the Dart station at Tara Street.

On the east west corridor along the quays Bachelors’ Walk would be reconfigured as a corridor for public transport, cycling and walking only, between its junctions with Jervis Street and O’Connell Street. Across the river, on the South side this arrangement would be mirrored, either on Aston Quay, Burgh Quay or George’s Quay.

Mr O’Brien said the intention was to allow access to city centre car parks and to businesses for deliveries but to remove the through traffic to outer orbital routes.

Other public transport aspects of the plan envisage the introduction of the high-capacity Bus Rapid Transit (BRT) system; increasing frequency and capacity of the Dart; new rail passenger services between Kildare and the Grand Canal Dock area through the Phoenix Park Tunnel and developing the high cycle network in the city centre;

CEO of the National Transport Authority Anne Graham, said the NTA will be investing €150 million in the planned projects between now and 2023. “Facing up to what’s needed, and taking some hard decisions now, will pay dividends for the city, and for the country as a whole, in the future”, she said.

Public consultation on the plan runs until July 16th.

For the full report, a summary report and details on how to take part in the consultation see: www.dublincity.ie/TransportStudy

3 Covid-19: Indian strain designated as variant of concern in Ireland