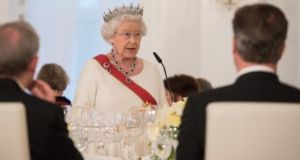 Reese Kilbride told the queen that he had been learning about the Easter Rising and was puzzled as to why Ireland was partitionedPhotograph: Guido Bergmann/Getty Images.

Inspired by the Easter Rising commemorations, sixth class pupil Reese Kilbride wrote to Queen Elizabeth II requesting that she turn over Northern Ireland to the Republic.

Reese, who is in St Helen’s senior national school in Portmarnock, Co Dublin, was advised by his mother Fiona Dowling to “just be polite” in his letter and not to expect a response.

Reese told the queen that he had been learning about the Easter Rising and was puzzled as to why Ireland was partitioned. He requested that the queen return the “six counties” and rounded off his letter by drawing a picture of himself, his friend Ethan and the queen together.

Ms Dowling said their family was not political and her son’s interest had simply been piqued by learning about the Rising.

“I thought it would hit the shredder immediately given the amount of correspondence she receives,” Ms Dowling said.

“I told him not to expect a response as she is a very busy lady so you can imagine my reaction when I saw a letter arrive addressed to my son from Buckingham Palace.” 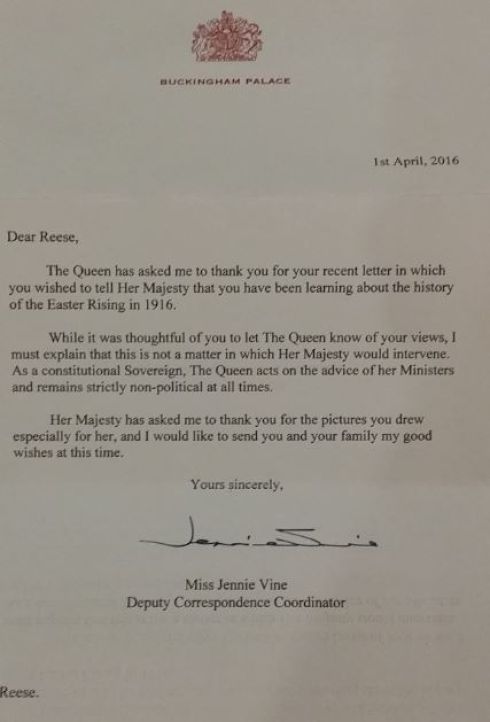 To their surprise, the queen wrote back through her deputy correspondence co-ordinator Jennie Vine.

“The Queen has asked me to thank you for your recent letter in which you wished to tell Her Majesty that you have been learning about the history of the Easter Rising 1916, ” the letter stated.

It was thoughtful of Reese for him to let Queen Elizabeth know his views, the letter continued, but “as a constitutional sovereign, the Queen acts on the advice of her ministers and remains strictly non-political at all times”.

She also thanked Reese for the drawing of the three of them together.