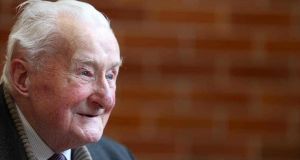 One of the founding members of the Provisional IRA has died.

Billy McKee, who led the organisation in Belfast at one stage, has died aged in his late 90s.

He split from Sinn Féin decades ago and condemned the signing of the 1998 Belfast Agreement and the decommissioning of paramilitary weapons.

McKee enjoyed legendary status among republicans at the start of the Troubles when he took to the streets of west Belfast after loyalist attacks in 1969.

He joined the Provisionals after the IRA’s move towards Marxism in the 1960s.

The veteran republican was also involved in a gun battle with loyalists attacking the Catholic Short Strand in east Belfast.

Following his split with Sinn Féin he joined the Republican Sinn Féin party.

It said: “Republican Sinn Féin send its deepest sympathy to the family and comrades of IRA volunteer Billy McKee, who died this morning.”

While in prison, McKee led a hunger strike in 1972 in a bid to win recognition for IRA prisoners as political prisoners. – PA