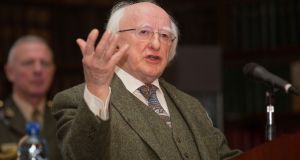 President Michael D Higgins: “I think one of the great challenges facing both countries, here in Ireland and in Vietnam, is to get an economic model that will benefit all the people.” Photograph: Paul Sharp

President Michael D Higgins has begun an eight-day visit to Vietnam and Laos that will focus on boosting bilateral ties, especially in trade, investment, development, education and training.

Mr Higgins is due to meet Vietnamese president Tran Dai Quang at the presidential palace on Monday and later in the day he will also meet Nguyen Thim Kim Ngan, chair of the National Assembly.

A strong focus of the trip will be Irish Aid projects in Vietnam and Laos, and on Tuesday President Higgins will give a keynote address to the country’s oldest university, the Vietnam National University. He will be accompanied by Sabina Higgins, as well as Minister for Foreign Affairs Charles Flanagan

A significant part of the visit will be focused on aid. Vietnam is the only Irish Aid Key Partner country outside Sub-Saharan Africa, and while it continues to have significant development challenges, Vietnam has made major progress in recent years.

In an interview with Vietnam News, Mr Higgins said Ireland and Vietnam shared a struggle for independence, and he said Irish people were impressed by how the Vietnamese people had to defeat not one but several imperialist aggressors.

“I think one of the great challenges facing both countries, here in Ireland and in Vietnam, is to get an economic model that will benefit all the people, when all the citizens have an opportunity to get an education, get housing, etc,” he said.

“In this context, the reduction of poverty from 70 per cent to less than 23 per cent is a very significant achievement,” the president said.

Vietnam is four times bigger than Ireland and has a population of over 88 million. Ireland gave $150 million (€134.88 million) in non-refundable aid to Vietnam between 2007 and 2016, focusing on poverty reduction, support for vulnerable groups, and improving economic management.

Ireland has provided €1.54 million for research into the climate impacts on the Lower Mekong Basin work through the EU-led Global Climate Change Alliance (GCCA) from 2012 to 2015.

Ireland provides support to civil society organisations (CSOs) working to pilot and scale up new models in community-based climate-sensitive development. Of the total funding under the bilateral development co-operation programme in Vietnam, administered and co-ordinated by the Irish Embassy in Hanoi, €3.33 million relates to climate finance.

The state visit marks 20 years of diplomatic relations between Ireland and Vietnam.

Bilateral trade reached $402 million (€360.55 million) in 2015, up 28 per cent from the previous year. Ireland currently has 17 investment projects with combined capital of $20.7 million (€18.7 million) in Vietnam, ranking 67th among 115 countries and territories investing here.