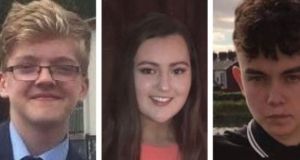 Morgan Barnard (left), Lauren Bullock and Connor Currie who died outside a disco in Cookstown on St Patrick’s night. 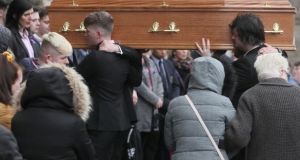 The parents of a teenager who died in the St Patrick’s Day crush outside the Greenvale hotel in Co Tyrone earlier this year have said they want the “absolute truth” about the circumstances of their son’s death.

Jimmy Bradley and Maria Barnard’s son Morgan Barnard (17) died, along with Lauren Bullock (17), and Connor Currie (16), after being caught in a crush of hundreds of teenagers who were seeking entry to a disco at the hotel in Cookstown on March 17th.

Morgan’s parents told the BBC they want to know if his life could have been saved.

“And of course prevention in the future, so this doesn’t happen another young person.

“There are questions to be answered after the police arrived, those questions are with the ombudsman who are going to come to a conclusion and not an opinion.

“If those questions don’t get to the truth for myself, Maria and Morgan, well then it may well be the case that we need an independent inquiry to get to the truth of why our son died at the Greenvale Hotel that night.”

At the end of March it emerged the outgoing PSNI chief constable George Hamilton had asked the Police Ombudsman to investigate the initial PSNI response after it emerged that first responding officers had withdrawn from the scene to await further police support.

When the first ambulance arrived police moved forward in support of them.

Last week, Mr Hamilton met with Morgan’s parents to offer his condolences on the loss of their son and to apologise for comments he had made describing the responding officers as “brave” which the family found “extremely hurtful”.

“I expressed my deep regret if any comment that I have made in relation to the incident has caused the family any further distress,” Mr Hamilton said.

“That was never my intention and I have apologised. No public commentary by me or any police officer will detract from the independent investigation being conducted into the initial PSNI response by the Police Ombudsman’s office.”

“The investigation into the circumstances that led to the deaths of Morgan Barnard, Lauren Bullock and Connor Currie continues and we are very grateful to all the witnesses who have come forward with information.”

Morgan’s parents also spoke of a moving moment in recent weeks when they were contacted by a young man who comforted Morgan as he lay fatally injured.

“We spoke to a young guy who wasn’t a friend of Morgan’s but who stayed with him until paramedics reached him while he was lying in the ground,” Mr Bradley said.

The grieving couple have said their son “lit up the room” and was adored by his siblings.

Two men arrested as part of the PSNI investigation into the deaths remain on bail.