Northern Ireland on Wednesday witnesses the biggest overhaul of local government in more than 40 years with the formal creation of 11 “super” councils that are replacing the 26 local councils.

The 11 councils were elected in May last year and operated in shadow form to the 26 councils comprising 582 members. Now the 11 councils, with 462 members, take over local business such as bin collection and street cleaning.

Under fresh legislation the councillors will have additional responsibilities in areas such as local planning, urban regeneration, community development and local economic and tourism development.

SDLP Minister of the Environment Mark Durkan described the changes as the “biggest shake-up in local government” since the 26-council system was established in 1973. He said the reform would modernise the system and “provide more effective and efficient services to ratepayers”.

“Change is always challenging and these are big changes,” said Mr Durkan. “This is about strong local government. It is about changing the way our councils are structured and the functions they provide. It is about giving councils more powers and flexibility to shape their areas and communities.” 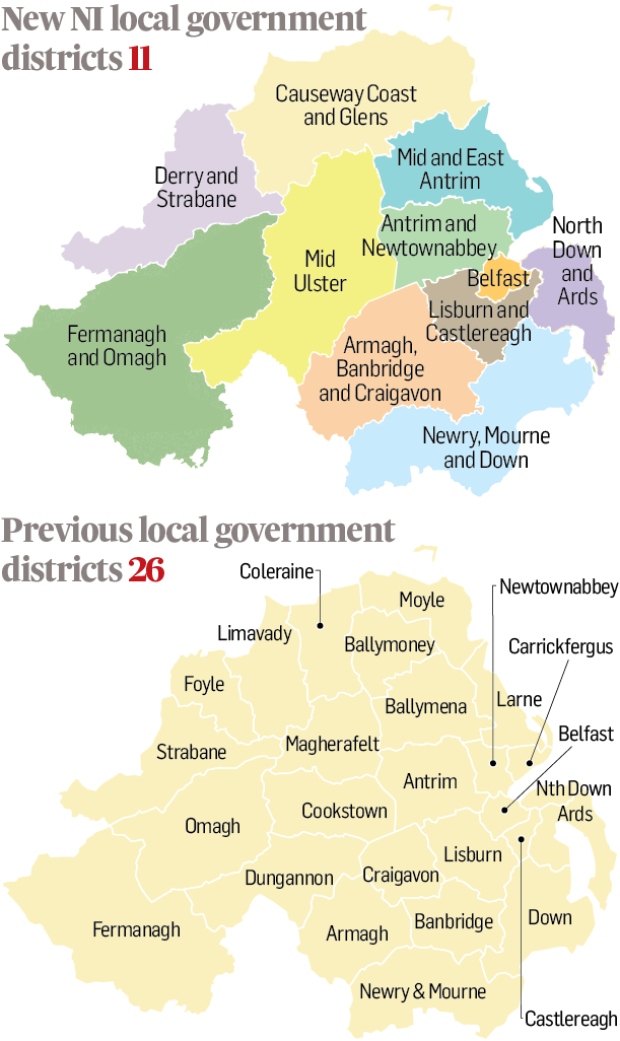 The biggest local authority is the expanded Belfast City Council whose membership has increased from 51 to 60. Belfast City Hall, with disputes over flags and other sectarian issues, has been the scene of some of the most bitter local disputes during and since the Troubles.

Sinn Féin is the biggest party in Belfast with 19 members. The DUP is second with 13. Between them Sinn Féin and the SDLP have 26 members compared to 24 unionists, reflecting the demographic shifts in Belfast in the past decade. Neither side, however, can dominate the other as Alliance with eight members hold the balance of power.

Eight of the 11 councils have 40 members each with Armagh, Banbridge and Craigavon Council and Newry, Mourne and Down Council each having 41 members.

The transition from 26 to 11 councils has run relatively smoothly although there have been a number of rows. Unionists reacted angrily after the nationalist-dominated Newry, Mourne and Down Council decided to put Irish first on its logos, literature and vehicles.

Former DUP minister Nelson McCausland accused nationalists of engaging in an exercise in “cultural sectarianism” but nationalists said it had always operated a bilingual policy on the council.

Unionists also decried the decision of the nationalist majority Mid Ulster Council to ban the sale of Remembrance Day poppies on council premises with local DUP MLA Ian McCrea saying the decision was “disgraceful and ghastly”.

Otherwise there have been no major glitches so far.

3 Summer jobs boom: ‘I’ve hired more students in the last three weeks than I have ever’

4 Coronavirus: 431 cases confirmed in the State