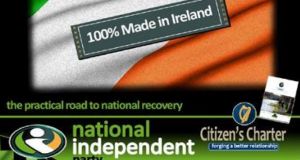 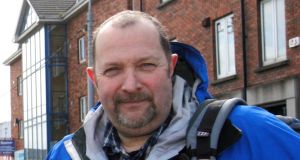 Formally launched in Dublin today, it has an estimated 120 members and lodged its registration papers as a political party to run a limited campaign in Dublin and Limerick for the local elections.

It then aims to reach a 300-member threshold and run in the 2016 general election.

The party favours abandoning the euro and returning to the punt but its European election candidate in the new South constituency Peter O’Loughlin said only when all euro zone countries abandoned the currency.

The party also opposes economic migration. “It makes no sense, while 500,000 of our people (are unemployed) and 300,000 over the last five years are leaving the country, that we should bring in economic migrants,” said Mr McLoughlin.

He stressed it was “simply numbers, not a case of ethnicity or where they’re from”.

When it was put to him that the party was akin in its policies to the UK Independence Party, Mr O’Loughlin, a teaching graduate, acknowledged there are similarities. “There are battlelines being drawn between those who are in favour of the European project and those who are against” and part of the European project inolved “trying to dilute national identities” but “the rest of Europe is swinging” away from that.

The party originated from a group of four who walked from Limerick to Dublin to protest against austerity, calling themselves Slí Níos Fearr (A Better Way).

An ardfheis is planned for the end of February and membership is €10 annually. Martin Critten, originally from the North of England, described the party as “a small grass roots organisation, just building ourselves up”.

He said the party’s manifesto, available at nationalindependentparty.ie, was in draft format and would develop as membership increased.

A business director working in advertising and marketing, he said “when the National Independent Party talks of reform we mean the return of accountability and responsibility and inclusivity in the ways in which this country is run”.

When it talks of Government “we mean cutting its size and the cost burden on the people that actually pay for it in their taxes”.

But asked if the party considered itself to the left, right or centre, Mr O’Loughlin said they had policies considered right-wing but other policies, such as on language, austerity and environment wereleft-wing.

Rather than right, left or centre “we are directly forward...we are liberterian.”