Music and hula-hoops for Dunnes Stores strikers in Galway 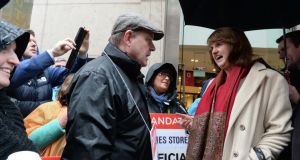 Small numbers of shoppers and Dunnes Stores staff had passed pickets by lunchtime.

“We’ve had great support from the public, and our only problem is the number of young staff who decided to show up for work - when we are doing this for them,” Mandate union member Margaret Kelly said outside the Dunnes Stores branch at Westside.

Ms Kelly, who has worked with the company for 14 years, said her contract was “one of the better ones”.

“So it’s sad to see some people leaving the union to show up for work, and I can only think it’s because they are frightened of losing hours altogether,” she said.

She described how her daughter, who works at another branch, had found herself the only member of her section supporting strike action earlier on Thursday morning.

“We aren’t looking for more money, but for some decent working conditions,”Ms Kelly said.

“We are doing this for our grandchildren, but some staff just don’t seem to understand that,”she added.

“The management put up rosters on Tuesday, but can change those by Wednesday and say it is because of ‘budgets’,”she said.

“Your wages can vary from €450 a week to €150 a week, depending on one manager,”she said, adding that she feared her hours would be cut next week because of her action.

Outside Westside, rock-trad band Cúla Búla played some jigs and reels in support of the Mandate members, as part of their grand tour of six Dunnes Stores branches in Galway. Their “support” was Shazzy, the hula-hooping performance artist.

The band said they had taken a break from working on their first studio-recorded album, which is due out in a few weeks.

“Car drivers have been beeping their horns, people expressing their support, and it’s been really effective so far,”band member Will O’Brien said. “This is one of Ireland’s biggest corporations, and it seems shocking that it would refuse to negotiate with staff.”

Former city mayor and Independent councillor Catherine Connolly visited each of the Galway branches to voice her support. “It’s interesting, and heartening, to see that the majority of strikers are women - leading the way,”she said.

In Knocknacarra, one of Galway’s largest suburbs, a half-empty carpark at 2pm on one of the busiest shopping days of the season reflected the level of public support.

“I had no idea things were so bad - but you’d wonder about how other shopping chains are treating their staff,” said Pat Butler, a local resident collecting a prescription in a nearby chemist. 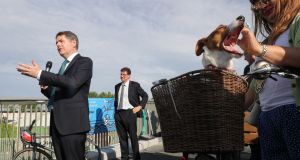