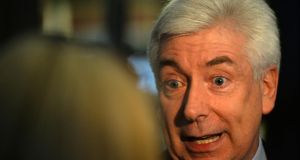 Alex White has called for a referendum to remove ban on blasphemy from the Constitution. Photograph: Dara Mac Dónaill / The Irish Times

The government should seriously consider holding a referendum to remove the constitutional ban on blasphemy during the lifetime of the current Dáil, the Minister for Communications has said.

Alex White said he understood and respected the view expressed by Taoiseach Enda Kenny when he said the Government would be holding just two referendums this year and the removal of blasphemy from the constitution was not one of them.

However, Mr White pointed out that in 1991 the Law Reform Commission made a recommendation to delete the blasphemy reference contained in Article 40.6.1 of the Constitution and that the 1996 Constitution Review Group took a similar view.

Mr White said a 2008 All-Party Committee report on the Constitution - a committee on which he served - made a similar recommendation as did the Constitutional Convention more recently with its proposal to replace criminalising blasphemy with a ban on incitement to religious hatred.

“I strongly believe that this is the right course of action to take. Two constitutional referendums are due to take place before the summer but there has been no Government decision as yet on whether to hold more referendums during the remaining period of the 31st Dáil,” said Mr White.

“The Taoiseach has expressed a view which I understand and respect. My own view is that the Government should look carefully at this, and consider finishing out, as far as possible, the work programme arising from the Constitutional Convention.

“While I appreciate that time may be short once the Dáil resumes after the summer, I believe we should do everything possible to affirm and respect the great work done by the Constitutional Convention. “

Mr White also revealed in his address to the Press Council AGM that he expects guidelines on media mergers to be finalised following the receipt and consideration of submissions received as part of a public consultation on draft guidelines published in December.

The draft guidelines, which were drawn up under the Competition and Consumer Protection Act, have introduced for the first time a system of governing media mergers to ensure media plurality, he said.

The new guidelines will help media organisations understand how the media merger process will work in practice, he added.

Mr White said he had received mixed opinions from media organisations in their submissions and was currently considering all views. He said he expected to finalise the guidelines within a number of weeks

Mr White also acknowledged how the rise of new media was putting pressure on traditional journalistic practices and values. He said the emphasis on speed was putting real pressure on “quality and standards”.

“On the editorial side, the imperative to compete with the sometimes riotous and always participatory new media poses risks to traditional newspaper values of accuracy, and to the separation of news, analysis and opinion.

“As a personal observation, I believe that the relatively recent practice of placing strongly opinionated offerings right next to news reports - sometimes penned by the same author - risks blurring those lines.”