Martin McGuinness’s wife thanks mourners for their support 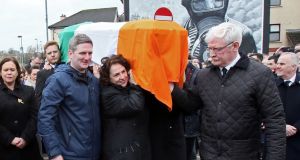 The wife of Martin McGuinness has thanked the thousands who attended his funeral for their “outpouring of love and solidarity”, and said that she and her family have been left broken-hearted by his loss.

More than 25,000 people attended his funeral in Derry on Thursday.

In a statement on Sunday, Bernie McGuinness said: “On my own behalf and [on behalf of] Martin’s family I want to thank all of those who have offered their condolences since Martin’s death, including the countless people who sent messages, Mass cards and prayers.

“I want to thank the doctors and the nurses who looked after Martin during his illness.

“I also want to express our deep appreciation of the many thousands of people who attended vigils in the course of the week in many parts of Ireland and overseas.

“From Martin’s return home on Tuesday and until we left for the funeral service on Thursday, long queues of people visited our home.

“The family took great comfort from their presence.

“I want to thank the local businesses who during this time very kindly provided food and sandwiches for those visiting the house.

“I want to especially acknowledge the many thousands who attended the funeral.

“Words cannot express our appreciation at the outpouring of love and solidarity which embraced us throughout Thursday.

“Finally, I want to thank all of Martin’s comrades in Sinn Féin, especially here in Derry, the many stewards, the friends who travelled from overseas, and in particular all of those who attended or participated in the funeral service in Long Tower Church and at the republican plot, including the singers and the musicians.”

Ms McGuinness added: “I and our entire family have been touched by the efforts of so many to provide solace and comfort to us throughout this very difficult period.

“Martin was my husband, a father and a grandfather. He was a republican activist for all of his adult life.

“He was passionate about his political beliefs, but also about his many other interests.

“Despite the frequency with which his political activism took him away from our home and family, he was at heart a proud family man who took great delight in the accomplishments of our children and grandchildren.

“He loved his family. And we love him. Our hearts are broken.”