Event held to mark 10th anniversary of the tunnel’s opening 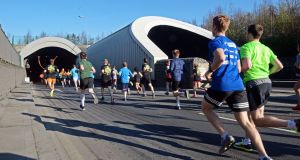 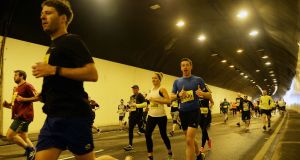 Over 2,400 runners were able to embrace a rare subterranean challenge as they raced along a 10km route beneath Dublin city as part of the Dublin Tunnel Underground Run on Sunday.

The charity event in aid of Focus Ireland was held to mark the 10th anniversary of the tunnel’s opening, and was only the third ever instalment of the seldom-held race.

As such, it was no surprise that places on the early morning starting grid were in high demand as participants readied themselves to run 5km to the exit of the northbound bore in Whitehall before turning around to run the same distance back to Dublin Port.

Among the waiting crowds on a beautiful spring morning was 23 year-old Richard Robinson from Finglas, who opted to carry a little extra weight for an already gruelling task.

“It’s a Captain America shield. I’m going to run with this the whole way, I think it’s about two or three kilos,” said Robinson, who is a cosplay enthusiast.

“I was mad enough to put myself in wave one for 45 minutes, I can do that but I want to challenge myself and see how I can do with the shield. I’ve also got the helmet on me, I’ve got the harness, belt, gloves,” he added.

The irony of having to run underground during one of the most pleasant days so far this year was not lost on race-goers, including 33 year-old Sushil Billay who is from India but living in Dublin.

“I was just talking to my friends; this is the wrong day to run underground! Probably we should be outside.

“I’ve done a 5km but not a 10km. I’ve always wanted to come here and run, the weather is nice so it should be good. The whole atmosphere is really nice, it’s pumping us up,” said Billay, flanked by his wife and friends.

Another 10km debutante was Julie Morris (53) from Blanchardstown, who described the challenge as one to “tick off the bucket list”.

“It’s a charity event for the homeless, that’s what actually drove me, and the excitement of running through the tunnel instead of driving through it. I’m ticking it off my bucket list, it’s actually one of the things I have wanted to do,” she said.

The event naturally necessitated some disruption with the Dublin Port tunnel closed to traffic over a 10-hour period between 5.30am and 3.30pm on Sunday.

A major part of the capital’s traffic infrastructure, the tunnel has been used by over 55 million vehicles since it was opened in 2006, a statistic which gives some insight into the huge logistical challenge involved in organising the run according to event manager Oliver Kirwan.

“It’s hard in terms of having an event like this in an urban area, but the cooperation of Transport Infrastructure Ireland, the gardaí, Dublin City Council and everybody involved with the tunnel has been amazing,” he remarked.

“There are 12 or 14 jet engines with fans that are keeping everyone as cool as they like in there and blowing behind them so they might run a bit quicker!”

Focus Ireland hopes to raise €50,000 through entry fees and sponsorship attached to the race, money which will help towards the homelessness services it provides around the country according to community fundraiser Elizabeth Smyth.

“It is a unique draw. The fact is the tunnel doesn’t get closed for people to walk through or certainly not to run through. It gives people the opportunity to actually see the mechanics of the tunnel itself,” she told The Irish Times.

“We have 79 services around the country and all money raised goes towards trying to prevent people becoming homeless, assisting them when they are homeless, and assisting them to come out of homelessness,” she said.