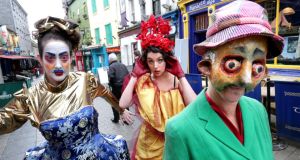 Wild and wicked “welding, hammering, gluing, shaping and dreaming” is gathering pace in the west, as Macnas prepares to terrify the townspeople of Galway, while the Aran island of Inis Mór plans a return to Halloween’s roots.

“Intoxicating, disorientating and lawless” is how the street theatre troupe describes its annual parade, set for this Sunday, and it is appealing to spectators to dig out the home-made masks, feathers and glitter, and “release and revelate” .

Crom the giant will unleash a promised “exploration of shadow and light, marvels and monsters”, with creatures and characters “raging, roaring, howling, laughing and gasping” their way around the city as streets are “set alight”.

The thousands who stream in on Sunday evening for Symphony for the Restless will be urged to “raise the night” in response to Crom by releasing their own inner demons.

A new local brass ensemble will play music inspired by the words of North American poet Maya Angelou, who passed away earlier this year, and volunteers are still being sought for hair, make-up, float pushing and generally being both “helpful and awesome”.

Out on the Aran island of Inis Mór, residents and visitors are also being invited to eschew 20th-century “trick or treating” and embrace the traditional Oíche Shamhna or Halloween with Féile na bPucaí on October 31st.

As resident Cyril Ó Flaithearta explains, the seasonal practice on Inis Mór had been to leave door latches or windows open to allow the spirits of the past to return for a night. Islanders dressed up as a “seipin”, or anonymous character, who remained silent and disguised until the night was over.

“They called to houses as part of a ‘cuartaíocht’ or visiting ritual, where attempts were made to guess their identity,” he says.

The “seipin” and “púca” characters are being advised to wear reflective clothing on the island on Friday week, to ensure they are seen by motorists – while also frightening them out of their wits. Macnas’s parade takes place at 4.45 pm from the Fisheries Field in Galway on Sunday, while Féile na bPucaí begins once night falls on Inis Mór on October 31st.

Macnas is also travelling east on bank holiday Monday to summon “monsters and marvels” from Dublin’s “drains and lanes” as part of the Bram Stoker festival. macnas.com