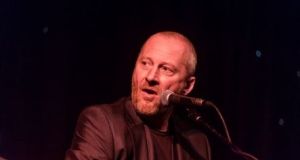 A ceremony filled with music and warm words provided a moving send-off for the international star known as Black in his adopted home of Schull, west Cork.

Singer Colin Vearncombe, originally from Liverpool, moved to the region over a decade ago and his wife said the family felt “held and loved” there in their loss.

Swedish opera singer Camilla Grieshel Vearncombe thanked family, friends and fans all over the world for “the love that has been poured over us this last three weeks”.

“I want to say thank you to Colin, for the beautiful years we shared together, to our three sons, for being so strong and such beautiful people,” Ms Grieshel Vearncombe said.

“I want to thank friends...that have come to the fore to keep us all going through what’s happened here with the loss of Fergus [O’Farrell, a Cork native and frontman of the band Interference, who died on Tuesday]. We are in a kind of state of shock, but also a state of love and bliss,” she said.

Mourners packed the Church of the Holy Trinity, where candles flickered in the windows and beneath the coffin of the Wonderful Life singer, described as a “true artist” who was fundamentally interested in people and their stories.

The singer’s friend, Steve Shearon, said Colin was an “astoundingly lucky man”. He said the pair had shared a “long chat” about the concept of “abundance” just before Christmas.

“The greatest luck he had was his family. He understood. He knew he was very lucky. He had everything he wanted,” Mr Shearon said.

West Cork-based pianist Maurice Roycroft said he and Colin had moved to the area around the same time. He said the singer displayed an almost childlike appreciation of music that endeared him to all around.

Mr Roycroft said it was not without irony that his friend had chosen the stage name Black.

“There was a twinkle of the eye behind every aspect of what he did,” he said. The yearning expressed in his songs was one of his great qualities, mourners heard.

“He dealt with subjects that might be considered vaguely uncomfortable. He expressed these things,” he said.

Vearncombe had built a “large and deep catalogue” of music over his career, releasing 14 albums and several compilations.

Musical tributes included an ethereal version of Nat King Cole’s Nature Boy sung by the late singer’s wife, Happiness sung by the singer’s son Max Vearncombe, and Prayer Before a Voyage, composed by the late Fergus O’Farrell, and sung by Paul Tiernan.

Students of Schull Community College formed a guard of honour as family and friends left the church ahead of a private cremation ceremony on Thursday.

Colin Vearncombe is survived by his wife Camilla and three sons, Max, Marius and Milan.

The family has asked for donations in lieu of flowers to Bru Columbanus, an accommodation service for relatives of seriously ill patients in Cork.

Fans and followers worldwide have been invited to attend a public memorial service in Vearncombe’s native Liverpool at 7pm on Friday, February 19th next, at Liverpool Anglican Cathedral.