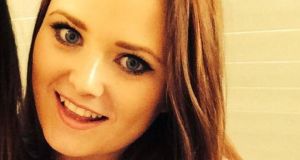 Aoife Beary (21), who suffered a traumatic brain injury in the Berkeley balcony collapse, faces a long road towards recovery.

Irish rugby star Jonathan Sexton has donated his 50th cap jersey as part of an online auction in aid of Aoife Beary, one of the survivors of the Berkeley balcony collapse.

Ms Beary, who suffered a traumatic brain injury in the accident, faces a long path towards recovery and is being cared for at the Santa Clara Medical Centre in California.

The 21-year-old’s rehabilitation programme involves a daily schedule of physiotherapy, occupational and speech therapy. Members of her family remain by her side.

The auction – due to close at midnight this Thursday – includes a jersey and rugby ball signed by the Irish squad, along with tickets for this weekend’s Ireland versus Wales clash at the Aviva Stadium.

Of the seven injured, at least four have returned home over the last month or so, including Sean Fahey, Conor Flynn, Jack Halpin and Clodagh Cogley.

Those who remain in California have been through six hospitals in the six weeks since the accident, an indication of the extent of the injuries they sustained in a 12-metre fall from a fourth-floor balcony.

Among their injuries were a brain injury, a severed spinal cord, shattered knees and elbows, broken limbs, cracked ribs and punctured lungs.

Although the students were covered by J-1 travel insurance, some families have privately said they are under pressure to relocate the students to Ireland to continue recovery.

Uncertainty at times about who was going to foot the bill for medical expenses and rehabilitation was one reason why family, friends and students have organised the fundraisers.

The online auction for Aoife Beary is at: www.32auctions.com /aoifebearyfunraiser