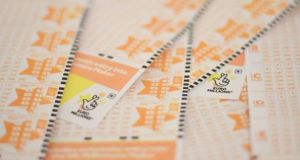 It is Ireland’s 16th EuroMillions jackpot win since the game began in 2004 and the second jackpot win in Ireland this year. Photograph: PA

The winning ticket in Tuesday night’s €49.5 million EuroMillions jackpot was sold in Ireland, the National Lottery has said.

The identity of the winner is not yet known.

It is Ireland’s 16th EuroMillions jackpot win since the game began in 2004 and the second jackpot win in Ireland this year.

The National Lottery has appealed to EuroMillions players all over the State to check their tickets to see if they have won.

🎉WOW🎉A lucky #EuroMillions player has WON tonight's amazing Jackpot of €49,564,586..This is the 6th largest jackpot ever won in Ireland 🥳🙌 Players check your tickets😀 https://t.co/una0XXn1k6#ItCouldBeYou pic.twitter.com/PAGHxI3pCi

Dolores McNamara, from Limerick, was Ireland’s first and biggest EuroMillions winner, scooping over €115 million in July 2005.

A family syndicate won €175.4 million on a ticket sold in Reilly’s Daybreak in Naul, Co Dublin.

In June 2013, a winning ticket sold in Beaumont, Dublin shared a EuroMillions jackpot worth over €187 million with another ticket-holder.

A Dublin work syndicate claimed the €88.5 million EuroMillions jackpot in January 2017. The winning ticket was sold at the Applegreen Service Station on the M1 Northbound in Lusk, Co Dublin.