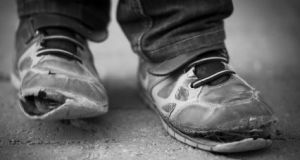 The risk of poverty among children rose in 17 of the 28 countries with the biggest in increases in risk in Croatia, Greece, Luxembourg and Malta. Photograph: Getty Images

Ireland is among the four worst EU countries for increased rates of poverty or social exclusion, according to a study looking at developments in all 28 member states.

It joined Greece, Hungary and Cyprus in having the most deteriorated rates between 2008 and 2013, according to the study “Europe: A Union for the Powerless as well as the Powerful?”

The research also found that the risk of poverty among children rose in 17 of the 28 countries with the biggest in increases in risk in Croatia, Greece, Luxembourg and Malta.

The research also claimed the EU had demonstrated a “profound failure of policy” to protect millions of powerless and vulnerable people.

The report from Social Justice Ireland found an EU-wide failure to deal with poverty and social exclusion in the past five years.

It said unemployment remained a huge challenge that was far from being adequately addressed despite recent improvements.

The authors also stressed that the level of social investment was critically important if poverty and unemployment were to be addressed effectively.

And the report highlighted that the level of total taxation was important because all countries with high social investment and below-average poverty rates also had above-average total tax-take.

Research and policy analyst Michelle Murphy, said there was no integrated EU strategy that “consistently and comprehensively promotes economic recovery while also protecting EU citizens especially those who are vulnerable and powerless”.

She said it might lead to a healthy balance sheet “but the lack of social inclusion and social cohesion has hugely negative impacts on millions of people in the EU”.

Director of Social Justice Ireland Dr Seán Healy said that during the crisis years the EU focused on fiscal consolidation and economic recovery as well as on protecting the euro and the banks. “At the same time it has failed to address the social consequences of the austerity approach which is being used to resolve the problems caused by the crash.”

The 100-page study highlighted that the EU was now further away from its agreed 2020 targets on reducing poverty and social exclusion than it was when the targets were set five years ago.

Six million more people are in poverty than at the beginning of the EU 2020 Strategy and it is short of its target in cutting the numbers in poverty by 25 million. Poverty levels fell in 21 EU states in 2012 but the numbers of poor have still risen.

It said “the countries in which the poverty or social exclusion rates deteriorated most between 2008 and 2013 are Greece, Ireland, Hungary and Cyprus”.

And the working poor, those who have a job but still live in poverty, represent one-third of working-age adults who are at risk of poverty in the EU.

Taxation is a major feature of the research, which showed that those member states with taxation rates above 35 per cent of GDP, tended also to be among the countries with the most developed social investment approaches.

Countries in Scandinavia and Central Europe tend to demonstrate higher levels of taxation, better protection of their populations from poverty and social exclusion and also have lower unemployment rates.

They included countries that demonstrate the greatest income equality and that are associated with the “highest levels of social justice” – they create the greatest access/participation for their populations to participate in society in a broad range of areas like education and health services.

Italy was a notable exception, with a relatively high total taxation ratio to GDP but it “does not score well in relation to protecting people from poverty or social exclusion or in tackling unemployment and they are considered not to have a well-developed social investment approach”.

The report stresses that Europe “must be seen as not only concerned with the goal of budgetary consolidation and the resolution of the debt crisis, but also with promoting justice and promoting equality and social inclusion. Much greater action to achieve such outcomes is required at European level.”