Death of Irish poet made headlines across the world 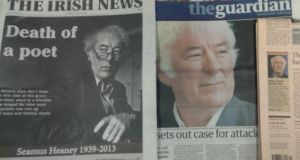 A sample of how a number of newspapers reported the death of Seamus Heaney.

The death yesterday of the finest Irish poet since Yeats made headlines across the world. Below is a sample of how the news was reported by international media organisations.

Margalit Fox recalls the poet for his work that “powerfully evoked the beauty and blood that together have come to define the modern Irish condition”.

The Times obituary: Seamus Heaney (this site uses a paywall)

Genius liberates. It also intimidates. Long after his death in 1939, W. B. Yeats continued to cast a shadow over the development of poetry in Ireland. Patrick Kavanagh, Thomas Kinsella, Austin Clarke, John Montague, John Hewitt and Eavan Boland were among those who fought to break free. None, it was felt, could be mentioned in the same breath as Yeats, who was to Irish poets of the postwar era what Shakespeare has always been to English playwrights — nonpareil. The shadow finally lifted one day in May 1966 with the publication of the first collection by 27-year-old Seamus Heaney.

He was a snowy-haired, craggy mountain of a man; a man who radiated granite integrity and deep kindness. He was a poet, among the greatest of our era, and the first of his nation to win the Nobel prize since Yeats.

Seamus Heaney was internationally recognised as the greatest Irish poet since WB Yeats. Like Yeats, he won the Nobel Prize for literature and, like Yeats, his reputation and influence spread far beyond literary circles.

He was forthright about his Irish nationality and, at one stage during his career, he turned down an offer of becoming poet laureate. “I’ve nothing against the Queen personally: I had lunch at the palace once upon a time?.?.?.?it’s just that the basis of my imagination, the basis of the cultural starting point, is off-centre.”

Seamus Heaney, Nobelist whose poems were the essence of the Irish soul

Heaney spoke and wrote freely of the link between his life and his art and demonstrated an extraordinary power of observation and recall. He was interested in the formative experiences of other writers just as his boyhood presented abiding images that ran keenly through his work.

Seamus Heaney, Ireland’s foremost poet who won the Nobel literature prize in 1995, died last night after a half-century exploring the wild beauty of Ireland and the political torment within the nation’s soul.

Death of a Poet

on this side of the grave.

But then, once in lifetime,

The longed for tidal wave

of justice can rise up

And hope and history rhyme