Israeli ambassador reported to his Irish counterpart about an ‘unlikely’ request 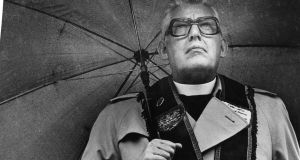 The Israeli ambassador said he told Ian Paisley obtaining arms ‘could be dealt with only between Governments’, according to files. Photograph: Matt Kavanagh

Ireland’s former ambassador to Britain Noel Dorr reported to Dublin on a curious conversation he had in June 1985 with the Israeli ambassador in London.

“He said that Rev Ian Paisley had been in touch with him ‘to obtain arms’ (sic),” Mr Dorr wrote in a letter to Michael Lillis, then an assistant secretary at the Department of Foreign Affairs.

Dorr continued: “I expressed surprise at this since I thought it unlikely that Paisley would leave himself open on something like this. The Ambassador said that the request related to ‘border protection’. I said I presumed that the emphasis was on surveillance equipment rather than on arms but the Ambassador did not elaborate further on the detail of the request. He said that he had replied to Paisley that these things could be dealt with only between Governments.”