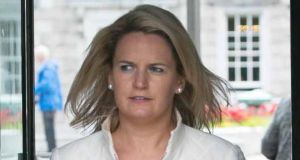 Ms Higgins was emailed twice in recent days by a man threatening to kill her. The Senator made a complaint to gardaí at about 1pm on Tuesday over the correspondence.

Ms Higgins is due to make a more detailed and formal complaint to gardaí on Thursday.

Speaking on RTÉ Radio One on Tuesday, Ms Higgins said she had contemplated leaving politics in recent days. She said: “I often think do I need this as I go about my job on a daily basis. I would be lying if I said it (quitting) didn’t cross my mind yesterday.”

Ms Higgins has been targeted online since she stood for the European elections in May 2014. The Senator said she has never had to put up with fear and intimidation she has been subjected to online.

She said the person who has been contacting her is “hell bent” on ending her political career.

Ms Higgins said she is extremely upset by the emails and said doing nothing was not an option. She has introduced a Bill in the Seanad to curb online abuse.

Asked about the issue ahead of an address to the MacGill summer school in Glenties, Co Donegal, Minister for Justice Frances Fitzgerald said: “I think this is one of the very big issues of our time, in fact. It is complex in terms of the balance between privacy and an open society.

“I do think that to date that the internet service providers are working very cooperatively in terms of if there is criminal behaviour online, taking that down, preserving evidence, all of that is actually happening at present,” she added.

“ There is quite a long way we can do without legislation. I do believe that governments and indeed the European Union have to build a very proactive engagement with the internet service providers. That is what’s happening at present. There’s a new high-level forum now between the European Commission and internet service providers to identify where there is criminal activity and obviously you need back-up of law.

“I think we’ll continue to examine to see how far we can go in legislation . But I do believe a lot can be done, and there’s a huge role for education as well,” Ms Fitzgerald added.