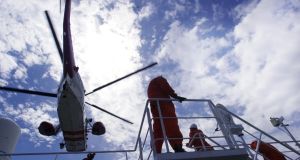 The girl scout was unconscious and being kept afloat by a 15-year-old boy when both were rescued by the Irish Coast Guard Waterford-based helicopter. Both were subsequently flown to hospital. File photograph: Bryan O’Brien/The Irish Times

The teenage venture scout who was rescued by the Irish Coast Guard after she was swept into the sea off Hook Head, Co Wexford at the weekend has died in hospital in Dublin.

Scouting Ireland said it extended its deepest sympathies to her family who had “lost a much-loved daughter and sister”, and said its thoughts and prayers were with them.

It said that “everyone in the scouting community in Ireland” was “devastated” by her death .

“In her short time with the group, she was an enthusiastic and popular member who participated fully in all activities,” Scouting Ireland said in a statement.

“We are providing support to the group, and in particular to the venture scouts and their leaders who were visiting Hook Head last Sunday,” it said.

“As you would expect, they are deeply upset and saddened at their fellow venture scout’s passing.”

The incident occurred at about 2pm on Sunday during an expedition by the scout group to Co Wexford.

Four young people were swept into the sea during a heavy swell in the aftermath of Storm Desmond.

Two of the four managed to clamber back onto rocks.

The girl was unconscious and was being kept afloat by a 15-year-old boy when both were rescued by the Irish Coast Guard Waterford-based helicopter.

The girl, still unconscious, subsequently fell out of the rescue strop as efforts were being made to recover both into the aircraft. She was immediately recovered from the sea.

Both teenagers were flown to hospital within 17 minutes of the initial call-out.

The winch incident was referred by the Irish Coast Guard to the Air Accident Investigation Unit, which is conducting an inquiry.

The Irish Coast Guard’s own review found the winch team had no option but to lift both teenagers simulatenously in an extremely challenging manoevre, due to the proximity of both to the rocks.

Scouting Ireland is carrying out its own review of the expedition.