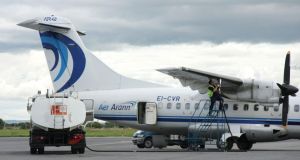 In a further twist to the row over the Government’s handling of the Aran Islands air link, a feasibility study on the future of Galway Airport recommends it be used as a “creative campus” for the film industry.

A complementary “mixed-use business park” could also be developed at the Carnmore site, according to the consultants’ study.

Galway Airport is scheduled to be a new hub for the proposed helicopter air link between the three islands and the mainland - replacing the service operated by Aer Arann Islands for over 40 years.

However, the new owners of the airport site - Galway city and county councils - were not consulted about the tender, and the airport’s aviation licence expires in December.

The feasibility study on future uses of Carnmore was commissioned by the two local authorities after they bought the 115-acre site for a bargain price of just over €1 million from the Galway chamber of commerce in late 2013.

Galway Airport lost 50,000 passengers between 2004 and 2009, due to proximity to larger landing facilities at Knock and Shannon; latterly, improved motorway links between Dublin and Galway put paid to its long-term future.

Aran islanders who have been protesting over the proposed switch of contract from fixed-wing to helicopter, point out the airstrip currently used by Aer Arann at Inverin is 8km from Rossaveal and allows flexibility for ferry transport if flying conditions are too difficult.

Galway Airport is 52km from the ferry port.

Aer Arann Islands has appealed the decision, but has given notice to its 40 staff based in Inverin and on the islands from the end of this month.

It was recently asked by the Department of Arts, Heritage and the Gaeltacht to extend the island service for another four months, to February, but has said it is seeking legal advice.

The air transport company would have to operate at a loss in low season if it was to accept the offer from the department on existing terms and conditions.

Social Democrat candidate for Galway West Niall Ó Tuathail has said an economic analysis he had carried out shows the proposed new contract would cost the State more.

“ Assuming 20 of the jobs lost at Aer Arann won’t be replaced, we will lose over €400,000 per year in income tax reductions and increased benefit payments,” he said.

“That’s more than the €300,000 we are supposedly saving. You couldn’t make this up but it seems that we will be paying more for a worse service,” he said.

Executive Helicopters, the company named as the preferred tenderer for a four-year contract between the islands and mainland, said last week that it would provide a “reliable, faster, more efficient” service to Galway city under the terms of the public service tender.