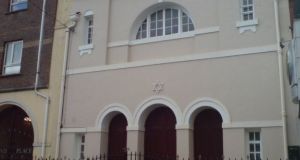 Cork’s synagogue on the South Terrace, which closed earlier this year.

The death of leading member of the Jewish community in Cork, Fred Rosehill, marked the closing of a chapter in the city’s history, according to the Chairman of the Jewish Representative Council of Ireland.

Maurice Cohen said the late Mr Rosehill, who died in Marymount Hospice on Tuesday aged 88, had played a vital part in keeping the memory of Jewish Cork alive.

He recalled a time when up to 500 members of the Jewish faith, most descended from Lithuanian Jews fleeing persecution, lived on Leeside and make a vibrant contribution to the life of the city.

“By telling the story of the Cork community to countless schoolchildren, he kept the memory of Jewish Cork alive and vibrant, and it is a tribute to him that the synagogue closed, not in the 70s or 80s, not even in the 90s or the turn of the century, but in 2016.”

Mr Cohen recalled Mr Rosehill’s remarkable energy and generosity, always being available if someone needed to mark a Jewish rite of passage, be it a birth, bar mitzvah or funeral.

“He kept the Passover festival dinners going for many years. He and his late wife, Patsy, entertained anyone - and seemingly everyone -in Cork. He was able to relate to people from all walks of life -- statesmen and locals, old and young, rich and poor. Everybody knew Freddie,” he said.

Mr Cohen said Mr Rosehill’s legacy included ensuring that the Jewish Cemetery at Curraghkippane was maintained by Cork County Council while he was also instrumental in persuading Cork City Council to set up the Shalom Peace Park off Albert Road in the city.

“Jewish children played in and around the site for decades, but it wasn’t until the late 1980s that it was rendered into a safe, permanent play space. Long after we’ve all gone, children will be playing on the swings in Shalom Park,” said Mr Cohen

“In his passing, a chapter on Cork’s life is well and truly closed, but the story goes on. It is our role to remember it - remember him - and to teach it to our children diligently. It is well and good to say that the Jewish Community in Ireland has lost a great Jew.

“But indeed, Cork has lost a great Irishman. In Freddie Rosehill’s memory, we all need to be that ‘indispensable man’ - to be there for our communities, not just the first in, but also the last out,” said Mr Cohen.

Mr Rosehill is survived by his daughter, Claire, his son, Michael and grandchildren Daniel, Deborah, Harry and Max. He will be buried at the Curraghkippane Jewish Cemetery on Wednesday at 2pm.