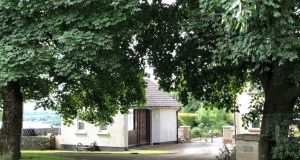 A family who bought a former Garda station within the Dublin commuter belt for €6,000 from the Office of Public Works has said it may rent out the building as holiday accommodation.

The former station at Crossakiel is a small pitched-roof building with just three rooms including kitchen and toilet facilities. It appears well maintained and in good condition. It is located on a hill looking towards the Loughcrew Cairns, a tourism attraction.

According to Peter McCann of local auctioneers Martin Shortt, the former station is firmly within the Dublin commuter belt, being “five minutes” or about the same number of kilometres from the northern end of the M3 motorway to Dublin.

Mr McCann is seeking €185,000 to €190,000 for a house in a development called The Cairns, across the road from the former Garda station. At €6,000 the price paid is comparable to three months rent for a two-bedroom apartment in Dublin 2.

Jim Murphy, who bought the building, told The Irish Times his family may use it for holiday accommodation, perhaps for people attending weddings at the Crover House Hotel on Lough Sheelin. The building is currently used by Mr Murphy and his family as storage.

The Murphys live next door to the former station in a former Garda sergeant’s house, which itself was vacated by An Garda Síochána some decades ago.

It is understood the OPW initially asked Mr Murphy for €10,000 for the building in early 2015. But, despite the attractive price, the family did not jump at the deal. Mr Murphy said the electricity cables for the premises came across from his own house and the two properties shared the same sewage facilities. “There was lots of clauses in the sale – they really couldn’t sell it to anyone else,” he said.

The €6,000 sales price figure, along with the figures for the other 41 stations sold between 2014 and 2016, was given to Fianna Fáil justice spokesman Jim O’Callaghan by Minister for Public Expenditure and Reform Paschal Donohoe, in reply to a written parliamentary question in July. Mr O’Callaghan criticised the sales, saying they had generated “small money” and “deprived the public of strategically important buildings”.

The former station at Baldwinstown in Co Wexford, a five-bay, two-storey building listed on the National Inventory of Architectural Heritage, was sold for €75,000 in March 2014.

At the upper end of the scale was Lauragh Garda station, near Glanmore Lake and Derreen Gardens, on the edge of Kenmare Bay in Co Kerry, which made €115,000 in February 2016. The building, which sits well back from the road, was refurbished by the OPW in 2007 at a cost of €57,370 which included a tarmacadam drive.

In 2008 Lauragh Garda station was refurbished again at a cost of €58,617 and works included reslating of the roof of an outhouse, fitting of doors, tiling, bathroom works and installation of intruder and of fire detection alarms. In 2010 the OPW spent €9,988, which was described as “works to galvanised gates”. In all the refurbishment cost more then €125,000 before the station was sold for €115,000.

It is understood the OPW was obliged under the terms on which it acquired the property, to offer the premises to the Derreen Estate. Jamie Bigham, whose family owns the estate, said it was “a matter of public record that the estate had to get it back”.