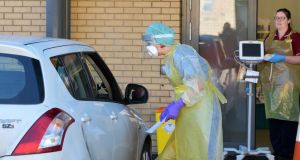 In relation to the three new coronavirus cases the North’s Public Health Agency said ‘staff are working quickly to identify contacts the individuals may have had, with the objective of preventing further spread of the virus’.

Players from two Northern Ireland football clubs have been advised to take precautionary action as the number of confirmed coronavirus cases in the North rose to seven at the weekend.

On Saturday the North’s Department of Health reported that three more people had reported positive for Covid-19.

All three are adults who had recently travelled from Italy and are linked to a previously confirmed positive case, the health department reported.

One of those tested positive had earlier on Saturday played in a football match in the Mid-Ulster Football League. He was not aware at that time he had the coronavirus.

The man had played for Hanover football club from Portadown in Co Armagh in a game against Coagh United reserves from Co Tyrone.

The club issued a statement on Saturday night confirming one of its players had tested positive.

“Hanover FC had no knowledge of the testing prior to confirmation of the positive test at 6.30 pm this \[Saturday] evening,” it said.

It said that immediately after getting the news it “took all precautionary action” by contacting the Hanover players, Coagh United and the Mid-Ulster league.

The club said it also was liaising with the health authorities and that details of the coronavirus help line was “passed on to all in question”.

“We also immediately cancelled a planned function and have arranged for a deep clean to be performed by qualified contractors,” the club said.

It added: “Again we wish to stress that this was something we had no prior knowledge \[of] but, following swift actions upon discovery, we hope that this will help ensuring all those in direct contact with the person in questions remains unaffected.”

In relation to the three new cases the North’s Public Health Agency said “staff are working quickly to identify contacts the individuals may have had, with the objective of preventing further spread of the virus”.