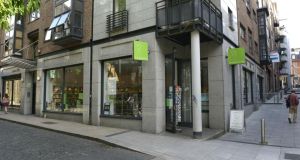 Dublin City Council is to sell off the commercial assets of Temple Bar Cultural Trust, the State company disbanded last year following controversy over its governance.

The council is hoping to realise more than €10 million from the sale of 25 commercial properties which were owned by the trust before it was taken over by the local authority.

The properties are mainly leased to local businesses, who will be given a chance to buy their premises.

Among the best known are the Gutter Bookshop on Pudding Row, the Queen of Tarts cafe on Cow’s Lane and designer Claire Garvey, also on Cow’s Lane.

Letters will be sent to the business owners offering them first refusal at market prices.

“It’s our intention to divest ourselves of the commercial interests of the trust. The council does not want to be in the business of continuing as landlords of commercial properties,” assistant council chief executive Brendan Kenny said.

The proceeds of the sales will be invested back in Temple Bar in the cultural enterprises remaining under the council’s remit, and in the upgrading of cobbles and paving, Mr Kenny said.

Initially the council had wanted to sell the properties in one lot, he said.

“The idea was to sell it off in one big batch, but this was causing concern among the existing businesses, so they will be offered the opportunity to purchase first at market rates.”

Businesses who have leases in the premises would be protected, Mr Kenny said. “All that will change here is who the landlord is.”

“We don’t want Temple Bar to be another Dundrum shopping centre, nor do we want some huge pension fund coming in who won’t have the interests of the retailers at heart. A mix of ownership is better for the organic growth of the area.”

The existing businesses should be given every opportunity to buy their premises, he said.

“These businesses have been through difficult times and need to be supported and protected while they’re still in the very early stages of getting back on their feet.”