Christmas joy as families are reunited at Knock airport

With Christmas just around the corner, we speak to arrivals in Dubln airport's Terminal 2. DAA expects over three quarters of a million people to pass through the airport over the holiday season. Video: Kathleen Harris 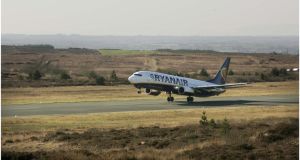 Four sisters had the happiest of Christmas reunions in the arrivals hall at Knock airport on Monday. Claire, Roisin and Noreen Burke, from Rosan Glas in Galway, donned their Santa hats to welcome home their sister, Helen Banks, and their only niece, 21-month-old Niamh.

Banks lives in London with little Niamh and husband Tom, but at this time of year there is no place like home. “It’s wonderful to be back for Christmas and it’s special to bring Niamh home. It’s her first Christmas at home in Galway,” she said.

The doting aunts descended on Niamh. “She is our only niece and it’s just wonderful to have her here for Christmas. She’s a little princess”, said Claire Burke. The family will be complete on Christmas Eve when Helen’s husband, Tom, flies in to Knock.

Ross, his wife, Danielle, and one-year-old Arlo were among the early arrivals in Knock on a flight from Liverpool.

“I’m delighted. It makes it special when you have them here for Christmas,” Antoinette said. She was trying to figure out how to make it to Dublin airport later in the day to collect a second son, Ian.

Jonathan, meanwhile, is due to travel from Hampshire on Christmas Eve. But fourth son Conor will be unable to get back for the festive period. Based in New York, work commitments will keep him from joining the rest of the family in Athlone.

It is the busiest Christmas period in the 28-year history of Knock airport. For the first time, staff are expecting to crack the 30,000-passenger barrier. Compared to last year, passenger traffic is up 5 per cent. It will round off the airport’s busiest year, with a milestone of 700,000 passengers being reached. It could be looking ahead to a bright future after the recent decision, in principle, by seven local authorities in the west to invest in the airport.

“I’m coming home to my proper home,” said Pete, after flying in from East Midlands airport. He was heading to Ballina to spend the festive break with Jackie and his brother Mike.

“It’s lovely to have him here and we can’t wait to get him home now,” said Jackie.

Joe Biden has been sworn in as the 46th US president