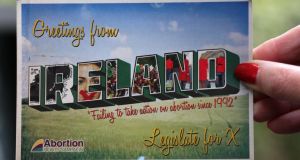 The campaign for “free, safe and legal” access to abortions in Ireland takes to the streets tomorrow as part of a global day of action.

The Abortion Rights Campaign, supported by the US-based Catholics for Choice, today urged the Government to repeal the 1983 anti-abortion amendment and introduce “workable” abortion laws.

A total of 12 women continue to leave Ireland daily to have abortions and the new laws introduced last July permitting abortions for some suicidal women are too restrictive, Cathie Doherty of the ARC said.

It was also unacceptable that the new laws provide for a 14-year sentence for assisting in procuring an abortion here, she added.

“We aim to break the silence and stigma that sorrounds abortion in Ireland,” she said. Politicians are “out of step” with the public as opinion polls show Ireland is “pro-choice as a nation”.

The campaign has organised a march in Dublin and other events to mark the Global Day of Action tomorrow for safe and legal access to abortion.

At a press conference today to launch the events, Jon O’Brien, president of Catholics for Choice, said the A, B, C and X cases had “inched” forward the reproductive rights of Irish women but they deserve more “than just being a letter in a lawsuit”.

“Do we have to go through the entire alphabet before Ireland is able to advance to a workable abortion law?”

Mr O’Brien said there are many Catholics in Ireland in favour of choice and many who have had abortions. Catholics have the right to dissent from non-infallible church teaching and to disagree with those in the hierarchy “who are permanently stuck in the pelvic zone”.

Other events organised by the ARC include the ’Choosing Choice, Packing up Stigma’ exhibition, featuring ’suitcase’ artwork by women who have had abortions. It runs at The Exchange in Temple Bar, Dublin, from today until Sunday.